Skip to main content
Finding how two proteins conspire to get kidney cells to self-destruct when oxygen supplies are low may one day improve dismal mortality rates for ischemic renal failure, researchers say.

Tubular cells - which have the daunting daily task of reabsorbing nearly 50 gallons of usuable fluid volume, including salt and glucose the kidneys filter from the blood every 24 hours - are particularly vulnerable to apoptosis and injury, Dr. Dong says.

"They are highly energy-dependent," he says. "That is why when you shut off the blood supply, these cells are quickly, irreversibly damaged and they die." Tubular cell injury and death is why kidneys are so vulnerable, for example in critically ill patients.

It's in this oxygen-deprived environment that two proteins, Bid and Bax - each a known killer in its own right - are activated and may partner to induce cell death. The killing proteins are pervasive, particularly in the kidneys, says Dr. Dong, who recently received a $1 million grant from the National Institute of Diabetes & Digestive & Kidney Diseases, to better understand their role in cell death during ischemic renal failure.

In both cell culture and animal models of ischemic renal injury, Dr. Dong and his colleagues have found Bid is cleaved or cut, releasing active fragments. Although he still doesn't know what cuts Bid, that act enables the protein to move from its usual place in the outer region of the cell to inside its powerhouses or mitochondria.

Cleaving results in what Dr. Dong calls truncated Bid or "tBid," which may interact with Bax and produce a conformational change. "Now Bax can move," says Dr. Dong, and it also heads straight for the mitochondria, which normally feed and oxygenate cells. Once inside, Bax bits re-collect, forming a complex capable of making a hole in the mitochondria and enabling molecules, such as cytochrome C, a major enabler of cell respiration, to escape. "This process as we have shown probably is mediated by Bax, and now we have found that Bid can be a critical trigger of Bax," Dr. Dong says.

A Bid knockout mouse model, developed at the University of Pittsburgh, helps illustrate the synergism. Without Bid, there is less apoptosis while kidney function and survival rates significantly improve. Also, interestingly, without Bid, cell regeneration that helps the kidney recover from ischemia is slower, he notes.

The kidney normally has some capacity to regenerate, with surviving cells quickly stretching to cover holes left by dead cells and later dividing to form more cells for tissue repair. "Within a couple of hours, neighboring cells will stretch to cover the wound, to take up the work of the dying cells," Dr. Dong says.

Unfortunately, while some kidney cells are working hard to make up the loss, Bid and Bax continue to trigger apoptosis and eventually the kidney fails, he says.

One goal is finding the protease that cleaves Bid - he doesn't think it's Bax - and following the ensuing cascade to better understand the process so it can be manipulated to stop needless cell death or, in the case of cancer, enhance self-destruction.

In related research, Dr. Dong's lab is studying kidney damage caused by the common chemotherapeutic agent, Cisplatin, used for testicular, ovarian and small cell lung cancer, head and neck tumors and more. Renal function is closely monitored while on therapy because of the drug's known side effects in the kidney.

"We want to see how the drug can kill kidney cells and if we can find a protective mechanism to prevent kidney cell death without stopping cancer cell death," says Dr. Dong. He thinks the answer may be in the differences between healthy and cancerous cells. 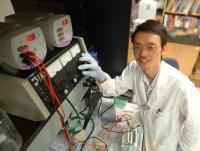