TEMPE, Ariz. - More than half of the 19,232 species newly known to science in 2009, the most recent calendar year of compilation, were insects - 9,738 or 50.6 percent - according to the 2011 State of Observed Species (SOS) report released Jan. 18 by the International Institute for Species Exploration at Arizona State University.

And, according to this latest report, there was a 5.6 percent increase in new living species discovered in 2009, compared to 2008.

The annual SOS report card on the status of human knowledge of Earth's species summarizes what is known about global flora and fauna. The 19,232 species described as "new" or newly discovered during calendar year 2009 represent about twice as many species as were known in the lifetime of Carolus Linnaeus, the Swedish botanist who initiated the modern system of plant and animal names and classifications more than 250 years ago, said the report's author, Quentin Wheeler, an ASU entomologist and founding director of the species institute.

"The cumulative knowledge of species since 1758 when Linnaeus was alive is nearly 2 million, but much remains to be done," Wheeler said. "A reasonable guess is that 10 million additional plant and animal species await discovery by scientists and amateur species explorers."

Additionally, recent macrogenomic surveys of DNA from terrestrial and marine environments have revealed "enormous and previously unsuspected levels of genetic diversity that corresponds in some not-yet-understood way to species diversity," explained Wheeler.

"It has been speculated, for example, that marine microbial species alone could number 20 million," he said.

With those staggering numbers as a backdrop, statistics, or "species bites," from the latest report note that:

In addition to the living species discovered during 2009, there were 1,905 fossil species, with insects and spiders accounting for 25.6 percent.

"As the number of species increases, so too does our understanding of the biosphere," said Wheeler, a professor in the School of Sustainability and a Senior Sustainability Scientist in the Global Institute of Sustainability at ASU. "It is through knowledge of the unique attributes of species that we illuminate the origin and evolutionary history of life on our planet. As we find out where species live and how they interact, we increase our ability to understand the function of ecosystems and make effective, fact-based decisions regarding conservation."

This is the fourth year for the annual State of Observed Species report compiled by the International Institute for Species Exploration. In addition to the 2011 report, the institute is also releasing a Retro SOS - a decade of species discovery in review - 2000-2009. The Retro SOS notes that from 2000 through 2009, there were 176,311 newly discovered species.

"It is particularly instructive to understand the tempo and patterns of discovery in recent years," said Wheeler, adding, "Given this data, it is interesting to ponder underlying causes of trends."

The "obvious lesson" from compiling this data, according to Wheeler, is that all nomenclatural acts, including descriptions of new species, must be mandatorily registered going forward. "In the animal world it takes about two years to mine the international literature for evidence of newly named species. The current lack of registration requirements simply compounds the problem of an already massive backlog," he said.

The report notes there are increasing calls for more aggressive and visionary approaches to mapping the species of the biosphere. "The adaptation of cyberinfrastructure to eliminate bottlenecks in the practice of taxonomy has created an opportunity to vastly accelerate species exploration," said Wheeler, who uses the SOS report and the annual naming of the top 10 new species each May, as ways to draw attention to this mission.

The SOS report and the Retro SOS are filled with statistics and charts, including a colorful word cloud. Sara Pennak, assistant director for partnerships and public outreach at the institute, prepared the data synthesis and analysis for the reports, which are available online at http://species.asu.edu. 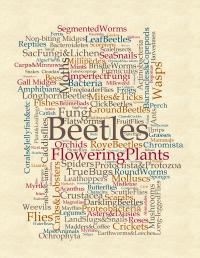