While residents of the United States and much of Europe think of locust plagues as biblical references, locust swarms still have devastating effects on agriculture today, especially in developing countries in Asia and Africa.

In a study in the journal Science on Jan. 27, scientists from Arizona State University and the Chinese Academy of Sciences show that insect nutrition and agricultural land management practices may partially explain modern day locust outbreaks.

During an outbreak year, locusts can populate over 20 percent of the Earth's land surface, negatively affecting more than 60 countries and the livelihood of one out of every 10 people. In this study undertaken at the Inner Mongolia Grassland Ecosystem Research Station in China, researchers examined Oedaleus asiaticus, one of the two swarming locusts of Asia. A closely related species, Oedaleus senegalensis, is a major pest in Africa.

Led by Arianne Cease, a doctoral student, in concert with scientists Jon Harrison and James Elser, and undergraduate student Colleen Ford from the School of Life Sciences in ASU's College of Liberal Arts and Sciences, the collaborative team also included Chinese researchers Shuguang Hao and Le Kang. Funding for their work was provided by the National Science Foundation.

The team's initial experiments were designed to test the hypothesis that locusts form swarms partly to escape deteriorating conditions or to seek out better food sources. Most herbivores, including insects, are thought to be limited by obtaining sufficient protein. The researchers began, therefore, by fertilizing grassland plots with nitrogen. Their expectation was that the added nitrogen would raise the plants' protein levels, enhance locusts' survival and growth and stop locusts from swarming.

They couldn't have been more wrong. Locusts fed on nitrogen-fertilized plots either died or grew more slowly. Puzzled, the scientists took a step back, examining which host plants these locusts preferred. The results showed that these locusts ate plants lower in nitrogen; not higher.

It had been known for some time that overgrazing in Inner Mongolia causes soil erosion, leading to nitrogen depletion from the soil, and reductions in the protein levels in plants. The team's surveys had showed that heavily grazed plots were populated by much higher numbers of locusts, so the scientists compared the preferences and performances of locusts for plants from grazed versus ungrazed plots. Remarkably, the locusts preferred to consume the low-nitrogen plants from the heavily grazed plots.

Moving the study into the laboratory and using chemically-defined diets, the scientists next tested the effect of different protein and carbohydrate levels on the locusts' growth rates. These experiments confirmed the researcher's field studies: Oedaleus locusts strongly preferred low protein, high carbohydrate diets. This ratio was about one part protein to two parts carbohydrate - lower than any grasshopper previously studied. "These experiments confirmed that consuming foods with too much protein is deleterious for this locust, explaining why heavy grazing promotes populations of Oedaleus," said Harrison.

"Our results fit with an emerging paradigm that animal species can vary dramatically in their nutritional responses," said Cease. "The particularly low protein: carbohydrate preference of Oedaleus may explain their success in a heavily-grazed world."

"Our study also showed that nitrogen fertilizer may be an inexpensive, environmentally less-damaging alternative pest control solution for this species," noted Cease.

"Who knows?" added Elser. "With the large global increases in atmospheric nitrogen from air pollution, we might find, at least in this limited way, some 'good news.' That is, that the airborne nitrogen deposited on grasslands may interfere with future locust outbreaks." 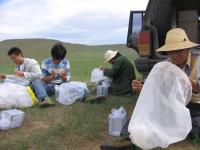 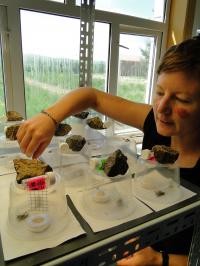