SAN FRANCISCO (January 4, 2012) -- Nature's game of intimidation and imitation comes full circle in the waters of Indonesia, where scientists have recorded for the first time an association between the black-marble jawfish (Stalix cf. histrio) and the mimic octopus (Thaumoctopus mimicus).

Undescribed by scientists until 1998, the talented mimic octopus is known to impersonate toxic flatfish, lionfish, and even sea snakes by creatively configuring its limbs, adopting characteristic undulating movements, and displaying bold brown-and-white color patterns. Thanks to these brazen habits, it can swim in the open with relatively little fear of predators.

The jawfish, on the other hand, is a small and timid fish. It spends most of its adult life close to a sand burrow, where it will quickly retreat upon sighting a predator.

During a diving trip in Indonesia in July 2011, Godehard Kopp of the University of Gottingen, Germany, filmed an unexpected pairing between the two animals. Like a lackey clinging on to the big man on campus, the black-marble jawfish was seen closely following a mimic octopus as it moved across the sandy bottom. The jawfish had brown-and-white markings similar to the octopus, and was difficult to spot among the many arms. The octopus, for its part, did not seem to notice or care.

Kopp sent the video to Rich Ross and Luiz Rocha of the California Academy of Sciences, who identified the jawfish species. Since this association had not been recorded before, they published their observations online last month in the scientific journal Coral Reefs. The authors surmise that the jawfish hitches a ride with the octopus for protection, allowing it to venture away from its burrow to look for food--a case of "opportunistic mimicry."

"This is a unique case in the reefs not only because the model for the jawfish is a mimic itself, but also because this is the first case of a jawfish involved in mimicry," said Dr. Luiz Rocha, assistant curator of ichthyology at the California Academy of Sciences. "Unfortunately, reefs in the Coral Triangle area of southeast Asia are rapidly declining mostly due to harmful human activities, and we may lose species involved in unique interactions like this even before we get to know them."

About the California Academy of Sciences

The Academy is an international center for scientific education and research and is at the forefront of efforts to understand and protect the diversity of Earth's living things. The Academy has a staff of over 50 professional educators and Ph.D.-level scientists, supported by more than 100 Research and Field Associates and over 300 Fellows. It conducts research in 12 scientific fields: anthropology, aquatic biology, botany, comparative genomics, entomology, geology, herpetology, ichthyology, invertebrate zoology, mammalogy, microbiology, and ornithology. Visit research.calacademy.org. 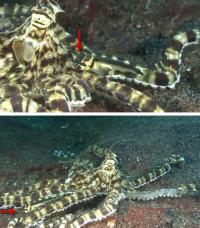