This release is available in Spanish.

Scientists at Universidad Carlos III in Madrid have presented a new technique based on artificial intelligence that can automatically create plans, allowing problems to be solved with much greater speed than current methods provide when resources are limited. This method can be applied in sectors such as logistics, autonomous control of robots, fire extinguishing and online learning.

The researchers have developed a new methodology to solve automated planning problems, an area of AI, especially when there are more objectives than it is possible to achieve in the available time. The idea is to get the system to find, on its own, an ordered sequence of actions that will allow objectives to be reached (in a final stage) given the initial situation and available resources. For example, given a group of trucks and goods, these techniques can use automatic planning to optimize the routes and means of transport, based on timetables and products. The methodology presented by these scientists would, in this case, allow the users to create plans in a situation in which not all the packages can be delivered, as would occur when the time that is needed to perform the task is greater than the time that is available, because of the inadequacy of the available resources. In this case, the system would attempt to find a plan by which the greatest number of goods possible could be delivered, thus minimizing the cost.

The new methodology that these scientists propose allows solutions to be found that are equivalent to or better than those provided by the other existing techniques, in addition to doing so much faster, when there are limited resources that can be used. "With regard to time, our technique is three to ten times faster, and with regard to quality, our solutions offer similar quality to that obtained by the best technique that is currently available", states one of the researchers, Ángel García Olaya, of the PLG group (Planning and Learning Research Group) of UC3M's Computer Science Department. "Now - he points out - we are making modifications that we hope will allow us to give still greater quality to our solutions". This study has been presented at the most recent Conferencia Española para la Inteligencia Artificial (CAEPIA - Spanish Conference on Artificial Intelligence) in Tenerife, where it received the award for the best article. In addition, it has recently been published in Lecture Notes in Computer Science by Springer. This research at UC3M has received funding from the Autonomous Community of Madrid and the Ministry of Science and Innovation.

This new methodology can be applied in any sector in which is makes sense to implement automatic planning, as is already done in the cases of extinguishing fires, autonomous control of robots, on-line learning, logistics, etc. In this last field, in fact, these researchers have already carried out a project with Acciona for managing their logistics division; it was subsidized by the Ministry of Industry, Tourism and Commerce. To be specific, they created a system of automatic planning for multimodal transport of goods. The data that was provided to the system included the position of the trucks, as well as the schedules of the transport ships and trains, together with the characteristics of the clients' orders (situation of containers, route, type of merchandise). With this information, the system first decided which truck and container should carry out each part of the service, to then calculate the route to be taken, the order in which the items would be delivered and, if necessary, to change the method of transport (truck, train and/or boat).

"What very often happens in real situations is that there is no plan that can reach all of the objectives due to the limitations of one resource, such as time, money, fuel, battery... and this is where the methodology proposed in the article can be used", explains Professor Ángel García Olaya. The researchers have tested it in a series of realms that simulate real situations and that occur frequently in the field of planning; it has already been integrated into an architecture for the autonomous control of robots that the group is working on. In fact, NASA has already used automatic planning for the autonomous control of their rovers, Spirit and Opportunity, which traveled to Mars a few years ago. In that case, they used a mixed initiative system in which the rovers' operators used a planner to create the plans (movements, sample taking, photos, etc.) for the two automated vehicles. The planner took all of the operating restrictions into account and created a plan that could be modified by the operators. Later the plan, which had been conveniently checked to avoid any inconsistency, was transmitted to the rovers so that they could execute it. Currently, the PLG group is applying the techniques developed in a project carried out with the European Space Agency (ESA) on the planning of observation operations in space. 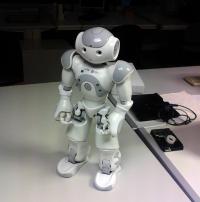