BOSTON -- A team led by researchers at Dana-Farber Cancer Institute has isolated a natural hormone from muscle cells that triggers some of the key health benefits of exercise. They say the protein, which serves as a chemical messenger, is a highly promising candidate for development as a novel treatment for diabetes, obesity and perhaps other disorders, including cancer.

Bruce Spiegelman, PhD, a cell biologist at Dana-Farber, is senior author of the report, posted as an advanced online publication by the journal Nature. The first author is Pontus Bostrom, MD, PhD, a postdoctoral fellow in the Spiegelman lab.

"It's exciting to find a natural substance connected to exercise that has such clear therapeutic potential," said Bostrom.

Spiegelman dubbed the hormone 'irisin,' after Iris, a Greek messenger goddess. He said the discovery is an important first step in understanding the biological mechanisms that translate physical exercise into beneficial changes throughout the body, both in healthy people and in preventing or treating disease.

"There has been a feeling in the field that exercise 'talks to' various tissues in the body," said Spiegelman, a professor of cell biology at Harvard Medical School. "But the question has been, how?"

According to the report, the irisin hormone has direct and "powerful effects" on adipose, or fatty, tissue -- subcutaneous deposits of white fat that store excess calories and which contribute to obesity.

When irisin levels rise through exercise -- or, in this study, when irisin was injected into mice -- the hormone switches on genes that convert white fat into "good" brown fat. This is beneficial because brown fat burns off more excess calories than does exercise alone.

Only a small amount of brown fat is found in adults, but infants have more -- an evolutionary echo of how mammals keep themselves warm while hibernating. In the wake of findings by Spiegelman and others, there has been a surge of interest in the therapeutic possibilities of increasing brown fat in adults.

Along with stimulating brown fat development, irisin was shown to improve glucose tolerance, a key measure of metabolic health, in mice fed a high-fat diet.

The discovery won't allow people will be able to skip the gym and build muscles by taking irisin supplements, Spiegelman cautioned, because the hormone doesn't appear to make muscles stronger. Experiments showed that irisin levels increase as a result of repeated bouts of prolonged exercise, but not during short-term muscle activity.

The Dana-Farber team identified irisin in a search for genes and proteins regulated by a master metabolic regulator, called PGC1-alpha, that is turned on by exercise. Spiegelman's group had discovered PGC1-alpha in previous research.

Bostrom said the hunt for molecular targets of increased PGC1-alpha activity ultimately pinpointed irisin, which turned out to be located within the outer membrane of muscle cells. This discovery ran counter to other scientists' contentions that such a protein would reside in the cell's nucleus.

To test whether increasing irisin alone could mimic exercise benefits, the scientists injected modest amounts into sedentary mice that were obese and pre-diabetic.

With 10 days of treatment, the mice had better control of blood sugar and insulin levels -- in effect, preventing the onset of diabetes -- and lost a small amount of weight. Although the weight loss was small, Spiegelman said that the hormone may have a greater effect when given for longer periods.

There were no signs of toxicity or side effects, which was predicted since the researchers limited the increase of irisin to levels typically caused by exercise.

In part because it is a natural substance and because the mouse and human forms of the protein are identical, Spiegelman said it should be possible to move an irisin-based drug rapidly into clinical testing -- perhaps within two years.

The irisin discovery has been licensed by Dana-Farber exclusively to Ember Therapeutics for drug development. Ember is a Boston-based startup co-founded by Spiegelman and scientists at the Joslin Diabetes Center and the Scripps Research Institute in Florida.

The scientists said their findings merely scratch the surface of irisin's multiple effects. They are continuing to explore the hormone's possible benefits in metabolic diseases like diabetes, insulin resistance, and obesity, which constitute a growing epidemic around the world, as well as neurodegenerative illnesses like Parkinson's disease.

Spiegelman added that as growing evidence implicates obesity and physical inactivity in cancer development, it's conceivable irisin-based drugs may have value in prevention and treatment of the disease.

The National Institutes of Health funded the research.

Dana-Farber Cancer Institute (http://www.dana-farber.org) is a principal teaching affiliate of the Harvard Medical School and is among the leading cancer research and care centers in the United States. It is a founding member of the Dana-Farber/Harvard Cancer Center (DF/HCC), designated a comprehensive cancer center by the National Cancer Institute. It provides adult cancer care with Brigham and Women's Hospital as Dana-Farber/Brigham and Women's Cancer Center and it provides pediatric care with Children's Hospital Boston as Dana-Farber/Children's Hospital Cancer Center. Dana-Farber is the top ranked cancer center in New England, according to U.S. News & World Report, and one of the largest recipients among independent hospitals of National Cancer Institute and National Institutes of Health grant funding. Follow Dana-Farber on Twitter: @danafarber and Facebook: http://www.facebook.com/danafarbercancerinstitute 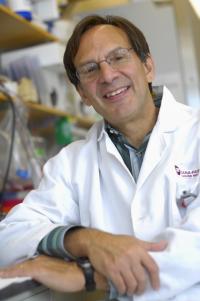