RICHLAND, Wash. - A new, 162-Teraflop peak supercomputer at the Department of Energy's Pacific Northwest National Laboratory is helping scientists do more complex, advanced research in areas such as energy storage and future power grid development. It also uses less energy than similar computers because of its unique water cooling system.

With the ability to compute as fast as about 20,000 typical personal computers combined, the Olympus supercomputer is the first large-scale computer exclusively available to PNNL researchers and their collaborators.

"Taking a cue from Washington state's Mount Olympus, this computer is enabling PNNL scientists to reach new scientific heights -- and at a low cost," said Kevin Regimbal, director of the new PNNL Institutional Computing program. "PNNL has pooled its resources in a tough economy to build the best possible computational resource that will enable new scientific discoveries."

"PNNL is getting more computer power for its investment, since costs are reduced when we purchase components in large volumes," Regimbal said. The system's larger size also allows scientists to complete significantly more complex calculations, which help them dig deeper into their research areas, he added.

The initial purchase and installation of Olympus cost $4.4 million. About $3.9 million of that came from internal lab funding for general computing capabilities, while $500,000 came from individual PNNL research projects that invested in specific capabilities needed for their work.

Unlike other large-scale computers, Olympus doesn't use air conditioning to remain cool. Instead, it uses water. The novel system uses a closed loop of water that absorbs the heat generated by Olympus as it crunches data.

The system is expected to use about 70 percent less energy than traditional computer cooling with air conditioning, which could save PNNL as much as $61,000 a year on Olympus' cooling costs.

Olympus is the heart of the new PNNL Institutional Computing program, which aims to advance scientific discovery through computational science. The cluster became fully operational in mid-October 2011 and it's already working on many PNNL research projects. Olympus is helping analyze how power grids of the future could operate and design better batteries for energy storage.

The system will also be used to improve computer models developed at PNNL, such as the NW Chem computational chemistry suite and STOMP, which simulates the movement of water and contaminants below ground. And PNNL is encouraging its scientists who may not normally use computation as part of their research to consider incorporating it in their next project with the help of the new system.

"High performance computing and simulation will be essential to future scientific discoveries. Olympus allows PNNL to be a player in that future," said Steven Ashby, PNNL's deputy director of science & technology. "It also will help us to nurture a culture of computational science that will enable our scientists and engineers to solve some of the most pressing problems facing the nation." 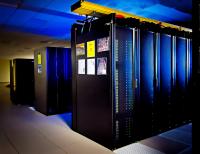