OAK RIDGE, Tenn. -- Atomic-level defects in graphene could be a path forward to smaller and faster electronic devices, according to a study led by researchers at the Department of Energy's Oak Ridge National Laboratory.

With unique properties and potential applications in areas from electronics to biodevices, graphene, which consists of a single sheet of carbon atoms, has been hailed as a rising star in the materials world. Now, an ORNL study published in Nature Nanotechnology suggests that point defects, composed of silicon atoms that replace individual carbon atoms in graphene, could aid attempts to transfer data on an atomic scale by coupling light with electrons.

"In this proof of concept experiment, we have shown that a tiny wire made up of a pair of single silicon atoms in graphene can be used to convert light into an electronic signal, transmit the signal and then convert the signal back into light," said coauthor Juan-Carlos Idrobo, who holds a joint appointment at ORNL and Vanderbilt University.

An ORNL-led team discovered this novel behavior by using aberration-corrected scanning transmission electron microscopy to image the plasmon response, or optical-like signals, of the point defects. The team's analysis found that the silicon atoms act like atomic-sized antennae, enhancing the local surface plasmon response of graphene, and creating a prototypical plasmonic device.

"The idea with plasmonic devices is that they can convert optical signals into electronic signals," Idrobo said. "So you could make really tiny wires, put light in one side of the wire, and that signal will be transformed into collective electron excitations known as plasmons. The plasmons will transmit the signal through the wire, come out the other side and be converted back to light."

Although other plasmonic devices have been demonstrated, previous research in surface plasmons has been focused primarily on metals, which has limited the scale at which the signal transfer occurs.

"When researchers use metal for plasmonic devices, they can usually only get down to 5 - 7 nanometers," said coauthor Wu Zhou. "But when you want to make things smaller, you always want to know the limit. Nobody thought we could get down to a single atom level."

In-depth analysis at the level of a single atom was made possible through the team's access to an electron microscope that is part of ORNL's Shared Research Equipment (ShaRE) User Facility.

"It is the one of only a few electron microscopes in the world that we can use to look at and study materials and obtain crystallography, chemistry, bonding, optical and plasmon properties at the atomic scale with single atom sensitivity and at low voltages," Idrobo said. "This is an ideal microscope for people who want to research carbon-based materials, such as graphene."

Coauthors are ORNL's Jagjit Nanda; and Jaekwang Lee, Sokrates Pantelides and Stephen Pennycook, who are jointly affiliated with ORNL and Vanderbilt. The research was supported by DOE's Office of Science, which also sponsors ORNL's ShaRE User Facility; by the National Science Foundation; and by the McMinn Endowment at Vanderbilt University. The study used resources of the National Energy Research Scientific Computer Center, which is supported by DOE'S Office of Science.

ORNL is managed by UT-Battelle for the Department of Energy's Office of Science. DOE's Office of Science is the single largest supporter of basic research in the physical sciences in the United States, and is working to address some of the most pressing challenges of our time. For more information, please visit http://www.science.energy.gov.

Caption: Electron microscopy at Oak Ridge National Laboratory has demonstrated that silicon atoms (seen in white) can act like "atomic antennae" in graphene to transmit an electronic signal at the atomic scale.

NOTE TO EDITORS: You may read other press releases from Oak Ridge National Laboratory or learn more about the lab at http://www.ornl.gov/news. Additional information about ORNL is available at the sites below: 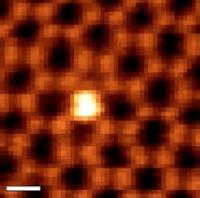