An extremely hot, massive young galaxy cluster -- the largest ever seen in the distant Universe -- has been studied by an international team using ESO's Very Large Telescope (VLT) in the Atacama Desert in Chile along with NASA's Chandra X-ray Observatory and the Atacama Cosmology Telescope. The new results are being announced on 10 January 2012 at the 219th meeting of the American Astronomical Society in Austin, Texas.

The newly discovered galaxy cluster [1] has been nicknamed El Gordo -- the "big" or "fat one" in Spanish. It consists of two separate galaxy subclusters colliding at several million kilometres per hour, and is so far away that its light has travelled for seven billion years to reach the Earth.

"This cluster is the most massive, the hottest, and gives off the most X-rays of any cluster found so far at this distance or beyond," said Felipe Menanteau of Rutgers University, who led the study. "We devoted a lot of our observing time to El Gordo, and I'm glad our bet paid off and we found an amazing cluster collision."

Clusters of galaxies are the largest objects in the Universe held together by gravity. The process of their formation, when smaller groups of galaxies merge together, very much depends on the amount of dark matter and dark energy in the Universe at that time -- so studying clusters can shed some light on these mysterious components of the cosmos.

"Gigantic galaxy clusters like this one are just what we were aiming to find," said team member Jack Hughes, also of Rutgers. "We want to see if we understand how these extreme objects form, using the best models of cosmology that are currently available."

The team, led by Chilean and Rutgers astronomers, found El Gordo by detecting a distortion of the cosmic microwave background radiation. This faint glow is the remnant of the first light from the Big Bang, the extremely hot and dense origin of the Universe about 13.7 billion years ago. This radiation left over from the Big Bang interacts with electrons in the hot gas in galaxy clusters, distorting the appearance of the background glow seen from Earth [2]. The denser and bigger the cluster, the bigger this effect. El Gordo was picked up in a survey of the microwave background with the Atacama Cosmology Telescope [3].

ESO's Very Large Telescope was used by the team to measure the velocities of the galaxies in this huge cluster collision and also to measure its distance from Earth. In addition NASA's Chandra X-ray Observatory was used to study the hot gas in the cluster.

Although a cluster of El Gordo's size and distance is very rare, the authors say that the new results are still consistent with astronomers' current understanding of a Universe that started with a Big Bang and is mostly made of dark matter and dark energy.

El Gordo most probably formed just like the Bullet Cluster (http://chandra.harvard.edu/photo/2006/1e0657/), a spectacular interacting cluster of galaxies that is almost four billion light-years closer to Earth. In both clusters there is evidence that normal matter, mainly composed of hot, X-ray-bright gas, has been wrenched apart from the dark matter. The hot gas was slowed down by the collision, but the dark matter was not.

"This is the first time we've found a system like the Bullet Cluster at such a large distance," said Cristóbal Sifón, student at the Pontificia Universidad Católica de Chile (PUC) in Santiago. "It's like the old saying: If you want to understand where you're going, you have to know where you've been."

[1] The formal name of the cluster is ACT-CL J0102-4915, the first part of the name shows that it is a galaxy cluster found using data from the Atacama Cosmology Telescope and the second part indicates the location of the object on the sky, in the southern constellation of Phoenix.

[2] The effect is called the Sunyaev-Zel'dovich (SZ) effect after the Russian astronomers, Rashid Sunyaev and Yakov Zel'dovich who predicted it in the late 1960s.

[3] The Atacama Cosmology Telescope (ACT) is a six-metre telescope on Cerro Toco in the Atacama Desert in the north of Chile and close to the site of ALMA. It is designed to make high-resolution surveys of the microwave sky to study the cosmic microwave background radiation.

These results on El Gordo are being announced on 10 January 2012 at the 219th meeting of the American Astronomical Society in Austin, Texas. A paper, "The Atacama Cosmology Telescope: ACT-CL J0102−4915 'El Gordo', A Massive Merging Cluster at Redshift 0.87" by Felipe Menanteau et al, describing these results has been accepted for publication in The Astrophysical Journal. 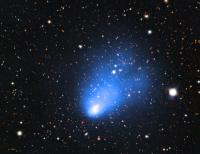