San Diego, CA, January 17, 2012 - Virtual reality-enhanced exercise, or "exergames," combining physical exercise with computer-simulated environments and interactive videogame features, can yield a greater cognitive benefit for older adults than traditional exercise alone, according to a new study published in the February issue of the American Journal of Preventive Medicine.

Research shows that exercise may prevent or delay dementia and improve cognitive functioning in normal aging. However, only 14% of adults aged 65-74 years old, and only 7% of those over 75 report regular exercise. Exergames have the potential to increase exercise by shifting attention from aversive aspects toward motivating features such as competition and three-dimensional scenery, leading to greater frequency and intensity, and enhanced health outcomes.

The Cybercycle Study enrolled 101 volunteers, ranging in age from 58 to 99 years, from independent living facilities with indoor access to an exercise bike. 79 participants completed initial evaluations and training, and rode identical recumbent stationary bikes, except the experimental bike was equipped with a virtual reality display. Cybercycle participants experienced 3D tours and raced against a "ghost rider," an avatar based on their last best ride. 63 adults completed the study, averaging three rides per week. Cognitive assessment to evaluate executive functions such as planning, working memory, attention, and problem solving was conducted at enrollment, 1 month later (pre-intervention) and 3 months after (post-intervention). Blood plasma was tested to measure whether a change in brain-derived neurotrophic growth factor (BDNF) indicated possible neuroplasticity, a mechanism of change that could link exercise to cognition.

The cybercycle riders had significantly better executive function than those who rode a traditional stationary bike, and cybercyclists experienced a 23% reduction in progression to MCI compared to traditional exercisers. Co-principal investigator on the project, Paul Arciero, PhD, professor of health and exercise sciences at Skidmore College, comments, "No difference in exercise frequency, intensity, or duration was found between the two groups, indicating that factors other than effort and fitness were responsible for the cognitive benefit."

"Navigating a 3D landscape, anticipating turns, and competing with others require additional focus, expanded divided attention, and enhanced decision making. These activities depend in part on executive function, which was significantly affected," notes Dr. Anderson-Hanley.

The study also found a significantly greater increase of BDNF in cybercyclists than in traditional riders, suggesting that interactive/combined mental and physical exercise may lead to cognitive benefits by way of biomarkers linked to neurotrophic effects.

"Further research will be needed to tease apart the contributions of a variety of factors in the cybercycling condition," says Dr. Anderson-Hanley. "Consistency across conditions for goal setting and competition suggests virtual reality imagery and interactive decision-making might be potent factors of the cybercycle." Exit interviews provided anecdotal evidence of the value of these unique features. Participants commented on their enjoyment of visual stimulation and the challenge of outpacing avatars.

"The implication of our study is that older adults who choose exergaming with interactive physical and cognitive exercise over traditional exercise may garner added cognitive benefit, and perhaps prevent decline, all for the same exercise effort," concludes Dr. Anderson-Hanley.

The two-year study was funded by a Health Games Research grant from the Pioneer Portfolio of the Robert Wood Johnson Foundation to explore how interactive digital gaming can improve the health behaviors and outcomes for people age 50 and older. 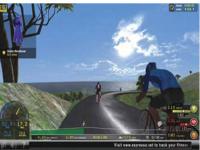