An inherited mutation in a gene known as the guardian of the genome is likely the link between exploding chromosomes and some particularly aggressive types of cancer, scientists at the European Molecular Biology Laboratory (EMBL), the German Cancer Research Centre (DKFZ) and the University Hospital, all in Heidelberg, Germany, have discovered. Their study, published online today in Cell, also presents the first whole genome sequence of a paediatric tumour: medulloblastoma, a brain cancer which is the second most common cause of childhood mortality in developed countries, where only car accidents cause more deaths in children.

Looking at the complete genome sequence of these tumours, the scientists found one or two chromosomes in each cell had countless parts in the wrong order, were missing some genes, and had extra copies of others. Such extensive rearrangements suggested that those chromosomes had been shattered, like a bead necklace that is pulled too hard, and then wrongly reassembled. But the scientists only found these telltale signs of chromosome explosion, or chromothripsis, in samples from a specific group of patients.

"All patients who had inherited a mutation in the TP53 gene showed signs of chromothripsis in their tumour cells, but none of the patients with normal TP53 did" says Jan Korbel, who led the genomics research at EMBL, "so this mutation must be involved either in shattering chromosomes, or in preventing the cell from reacting when a chromosome shatters."

This strong link between the hereditary TP53 mutation and chromothripsis has implications for diagnosis and treatment.

"As clinicians, if we find evidence of chromothripsis in a medulloblastoma sample, we can now look for an inherited mutation in the TP53 gene" says Stefan Pfister, who led the work at the DKFZ, "and we know that any family members who also have the mutation should be screened regularly, as they'll have a very high risk of developing particular types of cancer, including brain tumours."

Cancer treatments often involve killing the tumour cells by damaging their DNA with chemo- or radiotherapy, but these treatments also affect healthy cells in the surrounding tissue. If those cells have healthy copies of p53 - the protein encoded by TP53 - this gene will monitor the genome, and if it finds too much damage it will instruct the cells to stop dividing, sending them into the cellular equivalent of old age (senescence) or suicide (apoptosis). But if a patient has inherited the TP53 mutation from their parents, all their cells will have faulty copies of this gene, including the cells surrounding the tumour. Thus, those healthy cells will have trouble dealing with the DNA damage caused by such treatments, and could become cancerous themselves. So the findings have immediate clinical implications in that such patients should not be given DNA-damaging chemotherapy or high-dose radiotherapy, since both would greatly increase the likelihood of secondary cancers.

The scientists believe that the TP53 mutation may also play a role in causing chromosomes to shatter in the first place, by shortening telomeres, the caps that keep chromosome ends from fraying. This could make arms from different chromosomes more likely to get stuck to each other and shatter if they're pulled in different directions. Since telomeres naturally shorten with age, this could explain why, when the German scientists expanded their study to another cancer - an aggressive form of leukaemia in adults - they found that patients who had both a non-inherited TP53 mutation and evidence of chromothripsis were typically of an advanced age.

"Chromothripsis is thought to cause two to three percent of all human cancers," says Korbel, "so if we can really prove how the TP53 mutation affects this process, it could have a big impact on our understanding of how healthy cells in the body turn into tumours."

The study was undertaken as part of the International Cancer Genome Consortium (ICGC), an effort to study 50 different types of cancer worldwide.

"This study shows the power of combining genome sequencing and clinical expertise," says Peter Lichter from DKFZ, and member of the ICGC scientific steering committee: "cancer genome sequencing can help to understand why patients can react so differently to cancer treatments, and may also lead to the development of new anti-cancer drugs." 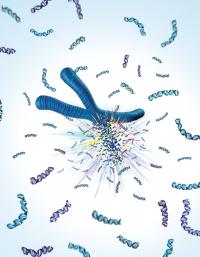