"I received your handwritten letter from the 28th of September 1962 with eight color photographs, five of which are of the High Court with its new colors. I am extremely bothered and saddened to see such colors. I never gave the order for such colors..."

So begins a letter from architect Charles-Édouard Jeanneret (better known as Le Corbusier) to his cousin Pierre Jeanneret about the Chandigarh, India, worksite. It is just one of many such letters and other unpublished documents that Anna Rosellini and Roberto Gargiaini uncovered in the archives of the Fondation Le Corbusier in Paris. All together, these bring new light to the architectural oeuvre of the 20th century's most famous architect.

The exhaustive research carried out by the authors provides valuable new insight into the aesthetic principles of Le Corbusier during the post World-War-II period. They explain his manner of defining the final artistic quality of the work directly at the construction site as if he were dealing with a sculpture or tableau, for example. Béton brut, a term invented by Le Corbusier at the beginning of the 1950s to describe his use of exposed concrete, is analyzed from all angles for the first time: fabrication, final formation and texture, and surface treatment.

The text also delves into the project management and construction of several Le Corbusier buildings constructed between 1940 and 1965. Sites explored in detail include the Unité d'Habitation (Housing Unit) at Marseille, the city of Chandigarh, the Tokyo museum, the Carpenter Center in Cambridge, and the Unité d'Habitation in Berlin.

Gargiani and Rosellini describe the convergence of artistic expression into what Le Corbusier defines as the espace indicible (ineffable space), including both the role of tapestries and paint to qualify these spaces and the use of photography to study the unexpressed potential of his architecture and paintings.

The book examines questions of optics, artistic vision, and the psychophysiology of perception in parallel with technical questions about the materials used in Le Corbusier's various works. This approach reveals the existence of a series of previously ignored theoretical questions about the artistic process shown here to be indispensable for the complete understanding of the work of Le Corbusier after World War II.

This examination of Le Corbusier's last and fundamental works decodes both the architect's vision and his quest for architectural and artistic solutions--solutions that are still defining the course of modern architecture today.

Roberto Gargiani is a professor of the history of architecture and construction at the Ecole polytechnique fédérale de Lausanne (EPFL) and the author of 11 other books, on subjects including Auguste Perret, Archizoom, Rem Koolhaas/OMA, and Superstudio. Anna Rosellini, a postdoctoral fellow at EPFL, is a specialist on Le Corbusier.

The Ecole Polytechnique Fédérale de Lausanne (EPFL) in Western Switzerland along the shore of Lake Geneva has more than 7,500 students today in seven academic schools including Life Science, Architecture, and Computer Sciences. In the last decade, the university has doubled its student body and climbed to number two in Europe and is the leader in approved European Union grants, a benchmark in scientific excellence. EPFL is home to more than 90 start-ups and numerous corporate partners such as Cisco, Nestlé, PSA and Logitech on campus. 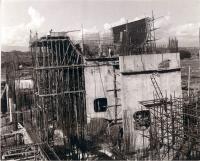 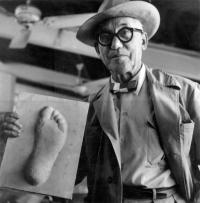 Le Corbusier with a Casting of His Foot (IMAGE)
view more