A team at the Polytechnic University of Cartagena has designed a new method for calculating drought trends. Initial results suggest that by the year 2050 there could be a 15% increase compared to the droughts seen in 1990 in the Segura river basin.

At the beginning of 2011, water levels in Spain's reservoirs reached an average of 77.83% of total capacity. However, the lack of rain last year has now reduced the average to 62.01%. The droughts that Spain experiences year on year are one of the main concerns of agricultural workers who use up to 80% of a reservoir's water for their crops.

A new study at the Polytechnic University of Cartagena (UPCT) has combined recorded data with the results from state-of-the-art regional climate change models to calculate the maximum length of droughts in detail. The results, which have been applied to the Segura river basin, show how "drought periods since the 1980's onwards have notably intensified," according to Sandra García Galiano, one of the authors of the study.

For García Galiano and her team from the UPCT's Water Resources R&D&i group, "semiarid basins, like that of the Segura river, are vulnerable to changes in rainfall. This creates uncertainty for agriculture." The purpose of the study is to "deepen knowledge of plausible draught trends so that this information can then be used to strike a better balance between adaptation and mitigation measures."

The method can be applied on a European scale

The main new feature of the UPTC study is the use of a new methodology, based on regional climate model combinations, which applies GAMLSS modelling (Generalized Additive Models for Location, Scale and Shape). Garcia Galiano justifies their choice on the basis that traditional frequency analysis techniques are flawed when its comes to detecting the variability of extreme events like droughts. In the researcher's words, "the non-stationary nature of hydrometeorological time series based on climatic and anthropogenic changes is believed to be the main downfall of traditional frequency methods."

As well as analysing the collected date, climatic models help to identify future drought trends that include a wide variation of factors. Bearing this in mind, the researcher states that "a 15% increase in extreme droughts in headwater basins compared to 1990 is expected by the year 2050."

Published by International Association of Hydrological Sciences (IAHS) in Risk in Water Resources Management, according to García Galiano, in summary the study offers "an innovative methodology for tackling the time-space evaluation of the risks associated with non-stationary frequency distribution of extreme droughts." In addition, they have confirmed that this method "can be easily applied to other national or European spatial scales as a way of increasing knowledge of hydroclimatic variation."

The study was mostly funded by the Spanish Ministry of Research, Development and Innovation under its National R+D+I Plan. Its authors are now working to ensure that this new methodology can be exported to other areas. References: 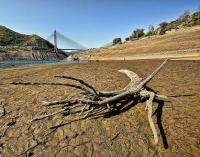