Insurgents commonly aim just below a soldier's body armor, where the trunk and legs join, to injure the body's largest blood vessels, causing soldiers to bleed to death within minutes.

"There is no way to put a tourniquet around it, so soldiers are getting shot in this area and dying within several minutes," said Dr. Richard Schwartz, Chairman of the Department of Emergency Medicine in the Medical College of Georgia at Georgia Health Sciences University. Police officers wearing chest protection as well as automobile accident victims can sustain similar injuries.

Efforts to externally compress the injury have been largely ineffective; the inch-round aorta runs parallel to the spine, so it can't be approached from the back, and is several inches inside the abdomen even in a fit soldier.

Schwartz and Dr. John Croushorn, Chairman of the Department of Emergency Medicine at Trinity Medical Center in Birmingham, Ala., hope their inflatable wedge-shaped bladder will make a lifesaving difference.

It's called an abdominal aortic tourniquet and it's placed around the body at the navel level, tightened then, much like a blood pressure cuff, inflated into the abdomen until it occludes the aorta and stops the bleeding. The goal is to restore the golden hour so soldiers survive long enough to get definitive care for their injury.

"By effectively cross-clamping the aorta with the abdominal aortic tourniquet, you are essentially turning the faucet off," Croushorn said. "You are stopping the loss of blood from the broken and damaged blood vessels. You are buying the patient an additional hour of survival time based on blood loss."

It was known that the knee pressed into the mid-abdomen could slow bleeding and block blood flow to the legs. The idea for the device came from studies conducted at GHSU in 2006 that quantified pressure needed to occlude the abdominal aorta. Schwartz and Croushorn started talking about turning that concept into a lifesaving device at an American College of Emergency Physicians meeting.

They first put the device on pigs, inflated it to the point there was no blood flow from the aorta to the femoral arteries and left it that way for an hour. There saw no potentially deadly increase in potassium levels in the blood and the pigs' leg and gut tissue remained healthy. Next they used it on healthy humans for a shorter duration to ensure that the aorta could be completed occluded.

Croushorn and Schwartz have premarket clearance for the abdominal aortic tourniquet from the Food and Drug Administration and have identified a manufacturer. They already have orders for the device from the U.S. military and will teach courses on how to use it to the military and law enforcement. Device development was funded by the U.S. Department of Defense.

The physicians still want to explore their device's potential for also helping CPR recipients. The chest compression that is the hallmark of CPR actually pushes blood all the way out to the extremities when the focus is keeping vital organs alive.

"With this device, you could, in theory, double the blood flow to the kidneys, heart and brain," Schwartz said. They also believe it will help concentrate drugs given during CPR where they are needed. "Now when a medic pushes a cardiac drug during cardiac arrest, the drug is circulated through the toes before it reaches steady state concentrations in the heart," Croushorn said.

Schwartz was a member of the 5th Special Forces Group (Airborne) during Operation Desert Shield and Desert Storm. He works with the Federal and Georgia Bureaus of Investigation and helped develop courses that bridge the gap between military and civilian groups that may work together during major disasters. Croushorn served as Command Surgeon, Task Force 185 Aviation in the U.S. Army in Iraq in 2004. He also works with the FBI. 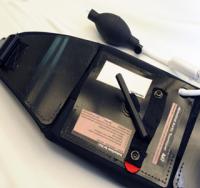