Augusta, Ga. - An international research team may have found a way to block a second wave of death that can result from pneumonia treatment.

Antibiotics are effective at killing pneumococcus - the cause of about 50 percent of pneumonias - but as it dies the bacterium releases potentially lethal toxins.

Adding an agonist that mimics the action of growth hormone-releasing hormone - which ultimately enables growth - may stop that second wave, according to research published in the Proceedings of the National Academy of Sciences.

"You have to take antibiotics, if you don't, the bugs will grow and you most likely will die anyway," said Dr. Rudolf Lucas, vascular biologist at the Medical College of Georgia at Georgia Health Sciences University.

Problems start when a bacterium that causes pneumonia, in this case pneumococcus, is inhaled. Symptoms include mucus buildup, cough, fever, chills and shortness of breath. Antibiotics are the front line treatment to kill the infection.

An unfortunate result of bacterium death is release of pneumolysin, a toxin that can trigger formation of holes in the walls of the millions of tiny air sacs and blood vessels in the lungs. The result is that fluid, blood and other products find their way into air sacs that were intended for oxygen exchange.

"It's like making a hole in a bucket," said Lucas. He and Dr. Andrew V. Schally, Distinguished Leonard M. Miller Professor of Pathology & Professor of Hematology/Oncology at the University of Miami Miller School of Medicine, are co-corresponding authors on the study.

Pneumolysin naturally binds to cholesterol, a component of all cell membranes including cells lining the air sacs, or alveoli. Once attached to the membrane, the toxin produces complexes that make holes in the membranes of the air sacs before escaping to do similar damage to nearby capillaries. While the close proximity of capillaries normally enables air sacs to replenish blood with oxygen and to remove carbon dioxide, the now open exchange enables fluid and cells from the capillaries to penetrate air sacs as well as the space in between them. To make matters worse, the toxin also blocks a protective sodium uptake system in the lungs that can help remove fluids. Within a few days, the patient is back in jeopardy. "These patients are being treated with an antibiotic and aggressive intensive care support and they (can) still die," Lucas said.

Schally, a Nobel Prize recipient for his discovery of hypothalamic hormones and Head of The Endocrine, Polypeptide and Cancer Institute, Veterans Affairs Medical Center in Miami, developed the agonist that may one day make the difference for these patients. The agonist was previously shown to help protect heart muscle in the aftermath of a heart attack.

They got a clue when they applied the agonist to the growth hormone-releasing hormone in an animal model of pneumonia as well as human lung cells in culture: leaking was significantly reduced and beneficial sodium uptake was restored. Conversely, when they applied a hormone antagonist - to block its action - lung cells became leaky even without toxin exposure, further indicating the hormone's apparent role in protecting the lining of the air sacs and capillaries.

"This is an acute problem; dangerous lung fluid accumulation occurs within days in patients," said Lucas who anticipates the agonist, or a compound with a similar function, could someday be given to patients in those first few critical days to avoid the second onslaught.

As a result of the findings, extensive collaborative studies are being planned on the use of growth hormone-releasing hormone agonists to prevent edema in patients with bacterial pneumonia. Next steps include pursing a National Institutes of Health grant with Dr. Michael A. Matthay, Senior Associate, Cardiovascular Research Institute, University of California, San Francisco, to support more studies that include an isolated human lung model and a preclinical model of laboratory animals who follow the same course as patients: they are infected with the bacterium then given an antibiotic. In the model for the PNAS study, scientists gave the resulting toxin directly. 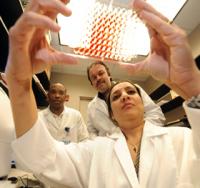 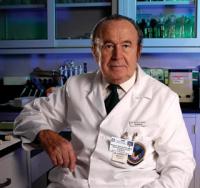