AUGUSTA, Ga. - Scientists have found at least one instance when the smaller sibling gets to call the shots and cancer patients may one day benefit.

The protein Chk1 has long been known to be a checkpoint in cell development: it keeps normal cells and damaged cells from dividing until their DNA has been fully replicated or repaired. Now scientists at Georgia Health Sciences University and the California Institute of Technology have discovered a shorter form they've dubbed Chk1-S ("S" stands for short) that essentially neutralizes its longer sibling so cell division can proceed.

That shorter form is in higher levels in cancer cells as well as fetal tissue, both of which require accelerated cell division. But the scientists also have shown that very high levels of Chk1-S actually reduce tumor growth and prompt premature cell division and death in other cells.

"Chk1 is needed for division of all cells, even cancer cells, so if you inhibit it completely by over-expressing Chk1-S, those cells also will not grow," said Dr. Navjotsingh Pabla, a postdoctoral fellow at Caltech. Chk1-S expression is nearly zero in normal, non-dividing cells.

These findings, published in Proceedings of the National Academy of Sciences, point toward the short form's potential to help diagnose and/or treat cancer, they said. Chk1 inhibitors, which promote abnormal cell division - and likely cell death - to occur before DNA replication/repair is complete, already are being tested on patients.

"Chk1-S is only expressed at a time when DNA is replicated or repaired so it binds to its sibling protein, Chk1, antagonizing it so now the cell can divide," said Dr. Zheng Dong, cell biologist at GHSU and the Charlie Norwood Veterans Affairs Medical Center in Augusta. "The question that has been hanging on for many years is: How is Chk1 regulated?"

They found that significantly increasing levels of Chk1-S induces cell division regardless of whether DNA replication or repair is complete. Incomplete DNA replication or repair can result in spontaneous cell suicide but also can result in chromosomal or genetic defects leading to cancer cell production. Additionally, cancer cells purposefully mutate to resist treatment. Pabla speculates that expression of the shorter version may be awry in cancer cells. "We are very interested in pursuing that."

"It's exciting to have found an important regulator of such an important protein that we think may contribute to cancer as well as its treatment," Dong said.

Chk1 and Chk1-S are made by the same gene they are just spliced differently. One way Chk1 gets turned on is by phosphorylation, or adding phosphate, which can activate or deactivate a protein. The level of phosphorylation of Chk1 is particularly dramatic when DNA repair is needed. Chk1, in turn, works to temporarily halt the cell cycle by phosphorylating another protein. Interestingly, Chk1-S cannot bind to its sibling when Chk1 is phosphorylated. It's known that mental retardation can result from mutation of ATR, a DNA damage-sensing protein that phosphorylates Chk1.

While the biggest burst of cell division occurs during development, it continues lifelong in areas such as the blood, skin and gastrointestinal tract where cell turnover is high. "Lots of tissues need to regenerate," said Dong.

Dong is a Regents Professor at GHSU and a faculty member in the university's Medical College of Georgia and College of Graduate Studies. He is a Research Career Scientist and Director of Research Development at the Charlie Norwood VA Medical Center. Pabla worked at GHSU with Dong on the study. 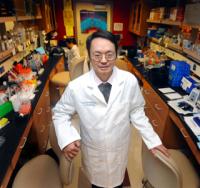