AUGUSTA, Ga. - Tiny zebrafish just may give scientists one solution to information overload in the search for new drugs therapies.

High throughput screening, which uses robotics and computers to rapidly screen drugs, genes or proteins, to identify, for example, compounds that are best at destroying cancer or restoring insulin-producing cells. The technology has both revolutionized and stymied research, said Dr. Jeffrey Mumm, biologist in the Medical College of Georgia at Georgia Health Sciences University.

While the decade-old technology can screen 100,000 compounds in a day, there is no efficient next step for whittling to a manageable number the resulting say, 2,500 compounds that on first blush appear to have potential. Consequently, drug discovery has actually stalled, creating a scientific "indigestion," Mumm said. Drug failure rates and discovery costs, on the other hand, have escalated.

"The next best thing to do is probably take all the compounds and put them into an animal model that mimics the disease you are trying to cure but nobody has that kind of budget or would know where to start with that number of candidates," Mumm said.

One solution is pairing zebrafish with reporter-based assays that make certain parts glow, according to Mumm's research published in the journal PLoS ONE. He calls it Automated Reporter Quantification.

"It's a way to cut to the chase rather than having to make educated guess about which of the 2,500 compounds are really of interest," said Mumm. Zebrafish, which start out as single cell organisms that are fully functioning by day four, already are an invaluable research model for a wide variety of diseases, such as Mumm's efforts to regenerate cells in the face of degenerative diseases of the eyes or pancreas.

To produce a model of type 1 diabetes, for example, he uses a single drug to destroy insulin-producing cells; 24 hours later, he knows those cells are gone because the glow is gone in the transparent zebrafish.

Now, he can leave the fish in the well plates, which look like plastic ice trays with cubes about the size of pencil tops and come in multiples of 96. The individual wells enable him to quickly reassess the impact of the thousands of compounds identified by high-throughput screening in a living specimen. Simply put: Does the glow come back? The next step becomes logical and doable: study the 20 or so compounds that continued to show promise in a mouse model. These steps to the fish then mouse, called biological validation, have been a real bottleneck in science post high-throughput screening, Mumm said. "This is going to give you much more thorough information about how compounds affect the overall physiology of a living being," Mumm said.

He noted that reporter-based assays number in the thousands so what they can help find is essentially limited only by the imagination.

He's used one to monitor a major signaling pathway that consistently shows up in cancer. "We hooked the pathway up to a reporter that told us whether it was on or off, then tested whether we could modulate it over time and, sure enough, it was very easy to do," Mumm said. "Name the cancer and basically you have WNT activated so there is a huge effort in cancer therapeutics to try and essentially shut it down." 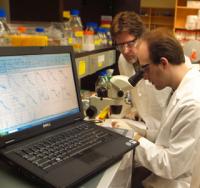