Glaucoma is the second leading cause of blindness. Nearly 4 million Americans have the disorder, which affects 70 million worldwide. There is no cure and no early symptoms. Once vision is lost, it's permanent.

New findings at Georgia Tech, published in January during Glaucoma Awareness Month, explore one of the many molecular origins of glaucoma and advance research dedicated to fighting the disease.

Glaucoma is typically triggered when fluid is unable to circulate freely through the eye's trabecular meshwork (TM) tissue. Intraocular pressure rises and damages the retina and optic nerve, which causes vision loss. In certain cases of glaucoma, this blockage results from a build-up of the protein myocilin. Georgia Tech Chemistry and Biochemistry Assistant Professor Raquel Lieberman focused on examining the structural properties of these myocilin deposits.

"We were surprised to discover that both genetically defected as well as normal, or wild-type (WT), myocilin are readily triggered to produce very stable fibrous residue containing a pathogenic material called amyloid," said Lieberman, whose work was published in the most recent Journal of Molecular Biology.

Amyloid formation, in which a protein is converted from its normal form into fibers, is recognized as a major contributor to numerous non-ocular disorders, including Alzheimer's, certain forms of diabetes and Mad Cow disease (in cattle). Scientists are currently studying ways to destroy amyloid fibrils as an option for treating these diseases. Further research, based on Lieberman's findings, could potentially result in drugs that prevent or stop myocilin amyloid formation or destroy existing fibrils in glaucoma patients.

Until this point, amyloids linked to glaucoma had been restricted to the retinal area. In those cases, amyloids kill retina cells, leading to vision loss, but don't affect intraocular pressure.

"The amyloid-containing myocilin deposits we discovered kill cells that maintain the integrity of TM tissue," said Lieberman. "In addition to debris from dead cells, the fibrils themselves may also form an obstruction in the TM tissue. Together, these mechanisms may hasten the increase of intraocular pressure that impairs vision." 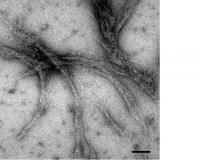