MIT researchers have discovered that certain photosynthetic ocean bacteria need to beware of viruses bearing gifts: These viruses are really con artists carrying genetic material taken from their previous bacterial hosts that tricks the new host into using its own machinery to activate the genes, a process never before documented in any virus-bacteria relationship.

The con occurs when a grifter virus injects its DNA into a bacterium living in a phosphorus-starved region of the ocean. Such bacteria, stressed by the lack of phosphorus (which they use as a nutrient), have their phosphorus-gathering machinery in high gear. The virus senses the host's stress and offers what seems like a helping hand: bacterial genes nearly identical to the host's own that enable the host to gather more phosphorus. The host uses those genes,-- but the additional phosphorus goes primarily toward supporting the virus' replication of its own DNA.

Once that process is complete (about 10 hours after infection), the virus explodes its host, releasing progeny viruses back into the ocean where they can invade other bacteria and repeat this process. The additional phosphorus-gathering genes provided by the virus keep its reproduction cycle on schedule.

In essence, the virus (or phage) is co-opting a very sophisticated component of the host's regulatory machinery to enhance its own reproduction -- something never before documented in a virus-bacteria relationship.

"This is the first demonstration of a virus of any kind -- even those heavily studied in biomedical research -- exploiting this kind of regulatory machinery in a host cell, and it has evolved in response to the extreme selection pressures of phosphorus limitation in many parts of the global oceans," says Sallie (Penny) W. Chisholm, a professor of civil and environmental engineering (CEE) and biology at MIT, who is principal investigator of the research and co-author of a paper published in the Jan. 24 issue of Current Biology. "The phage have evolved the capability to sense the degree of phosphorus stress in the host they're infecting and have captured, over evolutionary time, some components of the bacteria's machinery to overcome the limitation."

Chisholm and co-author Qinglu Zeng, a CEE postdoc, performed this research using the bacterium Prochlorococcus and its close relative, Synechococcus, which together produce about a sixth of the oxygen in Earth's atmosphere. Prochlorococcus is about one micron in diameter and can reach densities of up to 100 million per liter of seawater; Synechococcus is only slightly larger and a bit less abundant. The viruses that attack both bacteria, called cyanophages, are even more populous.

The bacterial mechanism in play is called a two-component regulatory system, which refers to the microbe's ability to sense and respond to external environmental conditions. This system prompts the bacteria to produce extra proteins that bind to phosphorus and bring it into the cell. The gene carried by the virus encodes this same protein.

In 2010, Chisholm and Maureen Coleman, now an assistant professor at the University of Chicago, demonstrated that the populations of Prochlorococcus living in the Atlantic Ocean had adapted to the phosphorus limitations of that environment by developing more genes specifically related to the scavenging of phosphorus. This proved to be the sole difference between those populations and their counterparts living in the Pacific Ocean, which is richer in phosphorus, indicating that the variation is the result of evolutionary adaptation to the environment.

The new research indicates that the phage that infect these bacteria have evolved right along with their hosts.

"These viruses - the most abundant class of viruses that infect Prochlorococcus - have acquired genes for a metabolic pathway from their host cells," says Professor David Shub a biologist at the State University of New York at Albany. "These sorts of genes are usually tightly regulated in bacteria, that is they are turned into RNA and protein only when needed by the cell. However, genes of these kinds in viruses tend to be used in a strictly programmed manner, unresponsive to changes in the environment. Now Zeng and Chisholm have shown that these particular viral genes are regulated by the amount of phosphate in their environment, and also that they use the regulatory proteins already present in their host cells at the time of infection. The significance of this paper is the revelation of a very close evolutionary interrelationship between this particular bacterium and the viruses that seek to destroy it."

"We've come to think of this whole system as another bit of evidence for the incredible intimacy of the relationship of phage and host," says Chisholm, whose next steps are to explore the functions of all of the genes these marine phage have acquired from host cells to learn more about the selective pressures that are unique to the phage-host interactions in the open oceans. "Most of what we understand about phage and bacteria has come from model microorganisms used in biomedical research," says Chisholm. "The environment of the human body is dramatically different from that of the open oceans, and these oceanic phage have much to teach us about fundamental biological processes."

Viruses con bacteria into working for them

Massachusetts Institute of Technology, Department of Civil and Environmental Engineering 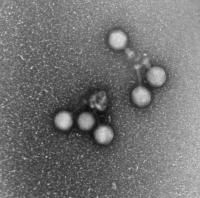