A superlens would let you see a virus in a drop of blood and open the door to better and cheaper electronics. It might, says Durdu Guney, make ultra-high-resolution microscopes as commonplace as cameras in our cell phones.

No one has yet made a superlens, also known as a perfect lens, though people are trying. Optical lenses are limited by the nature of light, the so-called diffraction limit, so even the best won't usually let us see objects smaller than 200 nanometers across, about the size of the smallest bacterium. Scanning electron microscopes can capture objects that are much smaller, about a nanometer wide, but they are expensive, heavy, and, at the size of a large desk, not very portable.

To build a superlens, you need metamaterials: artificial materials with properties not seen in nature. Scientists are beginning to fabricate metamaterials in their quest to make real seemingly magical phenomena like invisibility cloaks, quantum levitation--and superlenses.

Now Guney, an assistant professor of electrical and computer engineering at Michigan Technological University, has taken a major step toward creating superlens that could use visible light to see objects as small as 100 nanometers across.

The secret lies in plasmons, charge oscillations near the surface of thin metal films that combine with special nanostructures. When excited by an electromagnetic field, they gather light waves from an object and refract it in a way not seen in nature called negative refraction. This lets the lens overcomes the diffraction limit. And, in the case of Guney's model, it could allow us to see objects smaller than 1/1,000th the width of a human hair.

Other researchers have also been able to sidestep the diffraction limit, but not throughout the entire spectrum of visible light. Guney's model showed how metamaterials might be "stretched" to refract light waves from the infrared all the way past visible light and into the ultraviolet spectrum.

Making these superlenses would be relatively inexpensive, which is why they might find their way into cell phones. But there would be other uses as well, says Guney.

"It could also be applied to lithography," the microfabrication process used in electronics manufacturing. "The lens determines the feature size you can make, and by replacing an old lens with this superlens, you could make smaller features at a lower cost. You could make devices as small as you like."

Computer chips are made using UV lasers, which are expensive and difficult to build. "With this superlens, you could use a red laser, like the pointers everyone uses, and have simple, cheap machines, just by changing the lens."

What excites Guney the most, however, is that a cheap, accessible superlens could open our collective eyes to worlds previously known only to a very few.

"The public's access to high-powered microscopes is negligible," he says. "With superlenses, everybody could be a scientist. People could put their cells on Facebook. It might just inspire society's scientific soul." 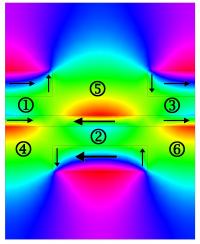