Under a year since a huge tsunami inundated paddy fields in Japan with salty sludge, scientists are near to developing locally-adapted, salt-tolerant rice.

Following a Japan-UK research collaboration, a new method for marker assisted breeding is being used to slash the time it takes to isolate new traits such as salt tolerance. Details of the new method, called MutMap, will be published in Nature Biotechnology on Sunday so they can be used by scientists and breeders worldwide to dramatically accelerate crop breeding.

"The beauty of the new method is its simplicity," said Professor Sophien Kamoun, co-author on the paper and Head of The Sainsbury Laboratory on Norwich Research Park.

"By working with cultivars favoured by farmers and already adapted to local conditions, the MutMap method will enable plant scientists and breeders to develop new crop varieties in nearer a year rather than five to ten years."

The new technique also takes advantage of the speed at which sequencing can now be done to screen plant mutants for valuable traits.

"MutMap overcomes one of the greatest limitations, which has been the time it takes to identify genetic markers for desirable traits."

Important traits such as drought and salt tolerance, semidwarfism, plant height and yield are often controlled by many genes each having a subtle effect. It is therefore difficult to identify the complete genetic basis for them.

Such traits are often bred in from wild relatives and without genetic engineering many years of back-crossing are required to breed out all the characteristics of the wild plant except the quality desired.

In the new method, scientists work with an elite rice cultivar and create mutants that harbour different traits. One mutant is identified with the desired trait and this is crossed with the original cultivar and grown in the field. The difference between the progeny of this cross and the elite cultivar can then be identified.

"The differences can be unequivocally observed even if they are small," said Professor Kamoun.

In the study to be published on Sunday, the scientists focused on plant height because of its crucial role in yield. The introduction of this trait fuelled the Green Revolution in wheat, rice and other cereals from the 1960s, but has not been thoroughly exploited. The gene for semidwarfism was first identified in the model plant Arabidopsis at the John Innes Centre, and only discovered in rice in 2002.

For the current study, they also measured six other traits of agricultural importance. Terauchi and his team have since established a mutant collection for salt tolerance which they are screening for markers. Once these have been identified, they will be used to develop rice cultivars that can be grown in paddy fields flooded by the tsunami last March.

The method will not work for all important traits, and further research is needed to establish how it can be applied to crops with larger genomes such as wheat, barley and maize.

The research collaboration grew out of the TSL approach to train biologists in bioinformatics, enabling them to take full advantage of it as an experimental science. Dr Kentaro Yoshida from Terauchi's group was funded by a Daiwa Adrian prize to receive training at The Sainsbury Laboratory in 2010.

Further funding was provided by research agencies in Japan and TSL's core funding from the Gatsby Charitable Foundation. 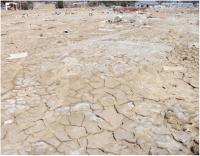 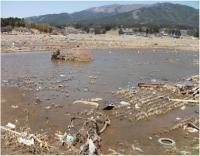 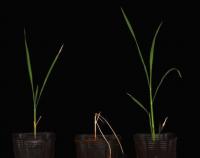