Sabertooth tigers may come to mind, but these extinct cats weren't the only animals with fearsome fangs. Take the false sabertooth cats -- also known as nimravids -- and their catlike cousins, a family of carnivores called the Barbourofelidae.

Both of these mammal groups lived millions of years before cats came to be, and had knife-like canines along with well-built arm bones, said author Julie Meachen, a paleontologist at the National Evolutionary Synthesis Center in Durham, NC.

This killer trait combination arose repeatedly in different sabertooth predators over time, Meachen reports in a new study -- presumably because it gave them an advantage when catching and killing prey.

The long, thin teeth of sabertooth cats look formidable, but they're actually fragile compared to felines living today, she explained. "Cats living today have canines that are shorter and round in cross-section, so they can withstand forces in all directions," Meachen said. "This comes in handy for hunting - their teeth are better able to withstand the stress and strain of struggling prey without breaking."

In contrast, the elongated canines of saber-toothed cats were flattened side-to-side and more oval in cross-section, which made them more vulnerable to fracture.

In a previous study published in 2010, Meachen found that the sabertooth cat Smilodon fatalis had exceptionally thick arm bones when compared with its feline cousins. "Thick, robust bones are an indicator of forelimb strength," Meachen said. The results suggest these animals may have relied on their forelimbs to help catch and kill their prey without fracturing their fangs.

But in studying the fossil skeletons of other sabertooth predators, Meachen had a hunch that the combination of fragile knife-like canines and beefy arm bones might not have been unique to sabertooth cats.

"I started noticing this trend," she said.

Long before cats came to be, the earth was home to a number of toothy carnivores that don't exist today. Nimravids were meat eaters that roamed the world for nearly 35 million years, from about 42 to 7 million years ago, alongside another group of extinct predators called the Barbourofelids, which lived for 20 million years until they, too, died out.

"If you saw one of these animals you'd probably think it was a cat, but true cats didn't evolve until millions of years later," Meachen said.

These animals left no living descendants, but thanks to fossilized bones we know their upper canines came in a wide range of shapes and sizes. Some species had canines that were shorter and round in cross section; others were longer, flattened side-to-side, and more oval in cross section. Some were even serrated "like a steak knife," Meachen said.

To find out if sabertooth predators with longer, thinner teeth and more delicate dentition generally had thicker forelimbs, Meachen measured the fossilized arm bones and upper canines of hundreds of museum specimens of extinct cats, nimravids and barbourofelids that once roamed North America.

She also measured the teeth and arm bones of 13 cat species living today --such as the tiger and the clouded leopard --all of which have conical teeth.

When she compared the dimensions of the teeth to those of the arms, she found that each group of animals gradually converged on the same solution -- the longer the teeth, the thicker the forelimbs. The results held up even after taking into account the fact that bigger species generally have bigger bones.

She attributes the striking similarities among the species to convergent evolution - "The same correlated sets of traits arose repeatedly through time," Meachen said.

"This means that sabertooth cats weren't actually that special in the big scheme of things," Meachen added. "Other lesser-known species that weren't in the cat family evolved the same way."

The study will appear in the January 4th issue of Paleobiology.

The National Evolutionary Synthesis Center (NESCent) is a nonprofit science center dedicated to cross-disciplinary research in evolution. Funded by the National Science Foundation, NESCent is jointly operated by Duke University, The University of North Carolina at Chapel Hill, and North Carolina State University. For more information about research and training opportunities at NESCent, visit www.nescent.org. 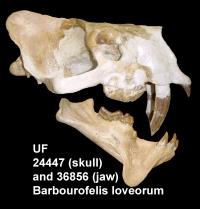 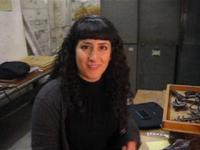