Summertime hail could all but disappear from the eastern flank of Colorado's Rocky Mountains by 2070, according to a new modeling study by scientists from NOAA and several other institutions.

Less hail damage could be good news for gardeners and farmers, said Kelly Mahoney, Ph.D., lead author of the study and a postdoctoral scientist at NOAA's Earth System Research Laboratory in Boulder, Colo. But a shift from hail to rain can also mean more runoff, which could raise the risk of flash floods, she said.

"In this region of elevated terrain, hail may lessen the risk of flooding because it takes a while to melt," Mahoney said. "Decision makers may not want to count on that in the future."

For the new study, published this week in the journal Nature Climate Change, Mahoney and her colleagues used "downscaling" modeling techniques to try to understand how climate change might affect hail-producing weather patterns across Colorado.

The research focused on storms involving relatively small hailstones (up to pea-sized) on Colorado's Front Range, a region that stretches from the foothill communities of Colorado Springs, Denver and Fort Collins up to the Continental Divide. Colorado's most damaging hailstorms tend to occur further east and involve larger hailstones not examined in this study.

In the summer on the Front Range, precipitation commonly falls as hail above an elevation of 7,500 feet. Decision makers concerned about the safety of mountain dams and flood risk have been interested in how climate change may affect the amount and nature of precipitation in the region.

Mahoney and her colleagues began exploring that question with results from two existing climate models that assumed that levels of climate-warming greenhouse gases will continue to increase in the future (for instance, carbon dioxide, which is at about 390 parts per million today, increases in the model to 620 ppm by 2070).

But the weather processes that form hail - thunderstorm formation, for example - occur on much smaller scales than can be reproduced by global climate models. So the team "downscaled" the global model results twice: first to regional-scale models that can take regional topography and other details into account (this step was completed as part of the National Center for Atmospheric Research's North American Regional Climate Change Assessment Program). Then, the regional results were further downscaled to weather-scale models that can simulate the details of individual storms and even the in-cloud processes that create hail.

Finally, the team compared the hailstorms of the future (2041-2070) to those of the past (1971-2000) as captured by the same sets of downscaled models. Results were similar in experiments with both climate models.

"We found a near elimination of hail at the surface," Mahoney said.

In the future, increasingly intense storms may actually produce more hail inside clouds, the team found. However, because those relatively small hailstones fall through a warmer atmosphere, they melt quickly, falling as rain at the surface or evaporating back into the atmosphere. In some regions, simulated hail fell through an additional 1,500 feet (~450 meters) of above-freezing air in the future, compared to the past.

The research team also found evidence that extreme precipitation events across all of Colorado may become more extreme in the future, while changes in hail patterns may depend on hailstone size -- results that are being explored in more detail in ongoing work.

Mahoney's postdoctoral research was supported by the PACE program (Postdocs Applying Climate Expertise) administered by the University Corporation for Atmospheric Research and funded by NOAA, the Bureau of Reclamation and the Western Water Assessment. PACE connects young climate scientists with real-world problems such as those faced by water resource managers.

"With climate change, we are examining potential changes in the magnitude and character of precipitation at high elevations," said John England, Ph.D., flood hydrology specialist at the Bureau of Reclamation in Denver, Colo. "The Bureau of Reclamation will now take these scientific results and determine any implications for its facilities in the Front Range of Colorado."

NOAA's mission is to understand and predict changes in the Earth's environment, from the depths of the ocean to the surface of the sun, and to conserve and manage our coastal and marine resources. Join us on Facebook, Twitter and our other social media channels.

Colorado mountain hail may disappear in a warmer future 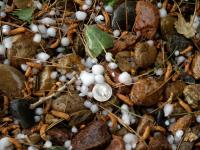 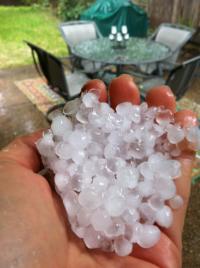