Similar to the way pavement, softened by a hot sun, will slow down a car, graphene--a one-atom-thick sheet of carbon with wondrous properties--slows down an object sliding across its surface. But stack the sheets and graphene gets more slippery, say theorists at the National Institute of Standards and Technology (NIST), who developed new software to quantify the material's friction.

"I don't think anyone expects graphene to behave like a surface of a three-dimensional material, but our simulation for the first time explains the differences at an atomic scale," says NIST postdoctoral researcher Alex Smolyanitsky, who wrote the modeling program and co-authored a new paper* about the study. "If people want to use graphene as a solid-state lubricant or even as a part of flexible electrodes, this is important work."

With the capacity to be folded, rolled or stacked, graphene is super-strong and has unusual electronic and optical properties. The material might be used in applications ranging from electronic circuits to solar cells to "greasing" moving parts in nanoscale devices.

Friction is the force that resists the sliding of two surfaces against each other. Studying friction at the atomic scale is a challenge, surmountable in only the past few years. The NIST software simulates atomic force microscopy (AFM) using a molecular dynamics technique. The program was used to measure what happens when a simulated AFM tip moves across a stack of one to four graphene sheets (see image) at different scanning rates.

The researchers found that graphene deflects under and around the AFM tip. The localized, temporary warping creates rolling friction or resistance, the force that exerts drag on a circular object rolling along a surface. Smolyanitsky compares the effect to the sun melting and softening pavement in the state where he got his doctoral degree, Arizona, causing car tires to sink in slightly and slow down. The NIST results are consistent with those of recent graphene experiments by other research groups but provide new quantitative data.

Most significantly, the NIST study shows why friction falls with each sheet of graphene added to the stack (fast scanning also has an effect on the friction). With fewer layers, the top layer deflects more, and the friction per unit of AFM contact force rises. The top surface of the stack becomes less yielding and more slippery as graphene layers are added. By contrast, the friction of three-dimensional graphite-like material is virtually unaffected by deformation and rolling friction, and is due instead to heat created by the moving tip.

Slippery when stacked: NIST theorists quantify the friction of graphene 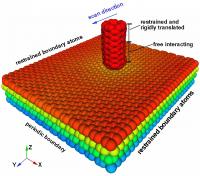