DeKalb, Ill. - If you think winter is tough on motorists, imagine what it's like for bicycle messengers, those daredevils who risk life and limb in downtown traffic to make rush deliveries.

Kidder, a former messenger himself, introduces readers to the profession and its fascinating subculture, exploring its appeal as well as its uncertainties and dangers, in his new book, "Urban Flow: Bike Messengers and the City" (Cornell University Press).

Through interviews with and observations of messengers at work and play, he shows how many become acclimated and highly devoted to the job.

"There's pressure to be fast, and in this subculture, fast and risky is valued," says Kidder, who worked as a messenger on and off for five years in Seattle, San Diego and New York City.

Messenger pay is low, and the danger element is more than mystique.

"If you're on a bike in the city and two feet away from traffic, more or less anything is a close call," he says. "But no one knows for certain how dangerous messengering is."

He points to one study that found the injury rate to be higher among bike couriers than for workers in the meat-packing industry. Yet the rates aren't much higher than would be expected for recreational cyclists riding 40 to 60 hours a week.

"It may look reckless to outsiders, but the way messengers ride is effective and defensive, even if it turns traffic laws upside down," Kidder says.

The NIU sociologist says delivery items run the gamut. During his courier days, Kidder transported everything from a dress for a model to a vial of blood for the Red Cross to a grocery bag full of family photos for actress Kathleen Turner. More typically, however, the messengers carry time-sensitive documents, such as architectural, legal and advertising materials.

To be sure, winter is the most dangerous and difficult season, and messengers take a certain pride in toughing it out, with some even riding without hats, gloves or socks.

Kidder's own scariest moment as a messenger sounds like a scene from a Jimmy Breslin novel. It came after work on a wintry day in Manhattan.

"I had ridden all day in the snow and felt like I was a real tough guy," he says.

On his way home, Kidder crossed into Brooklyn, where streets were unplowed, and his bike slid in front of and then crumpled beneath a car. With the bike broken, he asked the driver for lift home.

"He seemed oddly unconcerned about me putting the bike in his car," Kidder recalls. "Then he said, 'I don't want to freak you out, but this car is stolen.' "

From a sociological perspective, bike messengers presented an interesting case study for Kidder, whose research pursuits are at the intersection of cultural and urban sociology. He is particularly interested in how individuals find and maintain meaning in their everyday lives.

"For a lot of people, work is drudgery," Kidder says. "I'm interested in studying what can make work enjoyable and why, for some people, it becomes an essential part of their identity.

"On paper, a bike courier job sounds terrible, but messengers talk about it like it's the best job ever."

Messengering requires an intimate knowledge of geography and traffic patterns and demands split-second reflexes and decisions.

"Messengers look upon traffic as a puzzle that needs to be solved. Their work becomes a very creative and sometimes even artistic enterprise," Kidder says. "Those elements are missing from many jobs today."

"Urban Flow" also delves into the camaraderie among messengers. Off the job, some participate in chaotic bike races called alleycats, careening through the city to pre-assigned points in hopes of beating their peers to the finish line. It's not uncommon for messengers to travel the world to participate in these events, although the top prizes are often little more than bragging rights.

"For a portion of the messengers, the occupation becomes part of this all-encompassing lifestyle," Kidder says. "They find a great deal of satisfaction in what they do on and off the job. So I think messengers can teach us about work in general. It's not always about what you're paid."

"Urban Flow" is available for purchase from Cornell University Press, amazon.com and other book outlets. 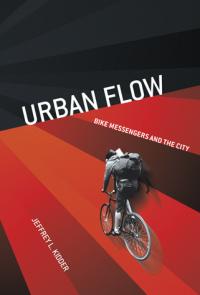