Tropical Cyclone Funso is now a dangerous Category 4 cyclone in the Mozambique Channel, moving southward between Mozambique on the African mainland and the island nation of Madagascar. As Funso became a major cyclone two NASA satellites were providing forecasters with valuable storm information.

On Jan. 25 at 7:40 UTC (2:40 a.m. EST), the Moderate Resolution Imaging Spectroradiometer (MODIS) instrument on NASA's Aqua satellite captured a visible image of Tropical Cyclone Funso. The image revealed the cloud cover extends from Mozambique on the African mainland, east to the coast of the island nation of Madagascar. MODIS imagery also revealed a clear 11 mile-wide eye.

The TRMM satellite also had a good view of powerful tropical cyclone Funso battering the Mozambique coast when it flew over on January 24, 2012 at 2204 UTC (5:04 p.m. EST). TRMM data showed that Funso was dropping moderate to heavy rainfall in bands covering the Mozambique Channel from eastern Mozambique to western Madagascar.

Cyclone Funso continues to track the over open waters of the southern Mozambique Channel and forecasts take it out into the Southern Indian Ocean over the next three days without any danger of a direct landfall. 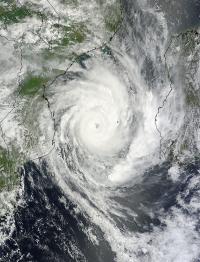 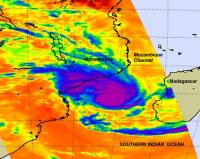 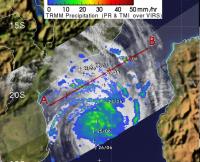