The Australian Bureau of Meteorology (ABM) has issued a Cyclone Warning for coastal areas from Mardie to Ningaloo including Exmouth and Onslow. ABM has also issued a Cyclone Watch east to Port Hedland and south to Coral Bay. In addition, a Blue Alert has been posted for "People in or near coastal and island communities between Mardie and Coral Bay including the communities of Mardie, Onslow, Exmouth and Coral Bay need to prepare for cyclonic weather."

The Moderate Resolution Imaging Spectroradiometer (MODIS) instrument aboard NASA's Aqua satellite captured a true color image of Tropical Storm Iggy on January 27 at 0655 UTC (2:30 a.m. EST), and showed Iggy as a rounded area of clouds with no visible eye. Animated infrared satellite imagery showed a slight cooling of cloud tops in Iggy's main band of thunderstorms, located west of the center. Dropping cloud-top temperatures mean that the strength in the storm is increasing and pushing those cloud tops higher in the atmosphere, where it is colder. Higher cloud tops mean stronger thunderstorms within the tropical cyclone.

Because of low wind shear and warm waters, Iggy is expected to continue strengthening on its approach to the Australian coastline. The Joint Typhoon Warning Center forecast as of January 27 takes the center of Iggy's center very close to Learmouth on January 30 and 31 before turning to the southwest and heading back to sea. 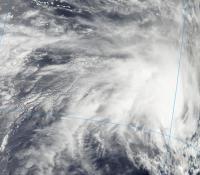