Powerful Cyclone Funso's eye has been clear in NASA satellite imagery over the last several days until NASA's Aqua satellite noticed it had "closed" and become filled with high clouds on January 27.

NASA's Aqua satellite passed over Tropical Cyclone Funso on January 27 at 0730 UTC (2:30 a.m. EST). The Moderate Resolution Imaging Spectroradiometer (MODIS) instrument captured a true color image of the storm that showed Funso's eye has now filled with clouds and appears ragged. Despite being filled with high clouds, the eye appears on multi-spectral satellite imagery to be 30 miles (48.3 km) in diameter. The MODIS image showed that Funso was moving south past the southern end of Madagascar to the east.

The Tropical Rainfall Measuring Mission (TRMM) satellite had a good view of powerful tropical cyclone Funso on January 26, 2012 at 1341 UTC (8:41 a.m. EST). TRMM data showed that Funso had moderate to heavy rainfall around the center and in bands of thunderstorms north of the center of circulation. The heavy rain was falling at a rate of 2 inches (50 mm) per hour.

Funso is weakening more as it moves to the south-southeast and will encounter stronger wind shear and cooler waters, both of which will sap the energy from the cyclone more quickly. Funso is expected to become extra-tropical over the weekend of January 28 and 29, 2012 in the open waters of the Southern Indian Ocean. 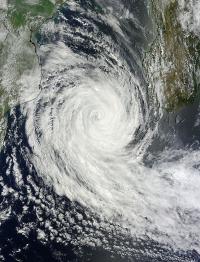