NASA's Aqua satellite passed over the low pressure system called System 97S on Jan. 24 and observed a large area of strong thunderstorms around its center that hinted at further development. On Jan. 25, the low strengthened into the ninth tropical depression and now a tropical storm of the Southern Indian Ocean.

NASA's Aqua satellite passed over Tropical Storm 09S on January 25 at 7:05 UTC (2:05 a.m. EST), and the Atmospheric Infrared Sounder (AIRS) instrument measured the cloud top temperatures. Just as they appeared in infrared imagery on January 24, thunderstorm cloud tops around the entire center of circulation and in some of the bands of thunderstorms that circled the center from northwest to northeast were colder than -63 Fahrenheit (-52.7 Celsius). Temperatures that cold indicate uplift (and evaporation) of air is very strong, and it pushes the cloud tops to the top of the troposphere. When cloud tops get that high, they tend to drop heavy rainfall (around 2 inches/50 mm per hour).

AIRS infrared imagery revealed that the convection continues to strengthen and during the early hours on January 25, bands of thunderstorms were developing around the center.

Although Tropical Storm 09S has moved in a westerly direction over the last couple of days, a weather system (elongated area of high pressure, called a ridge) will begin pushing it eastward toward Western Australia late on January 25. The Joint Typhoon Warning Center has forecast Tropical Storm 09S (TS09S) to come closest to the coastline of Western Australia by January 29 and 30, 2012.

The Joint Typhoon Warning Center expects that Tropical Storm 09S will continue to strengthen over the next couple of days and could reach Cyclone status. 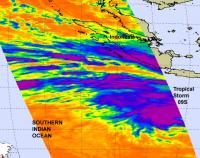