NASA's Aqua satellite passed over Tropical Storm Ethel on January 19, 2012 after she was born in the Southern Indian Ocean. The island of Rodrigues is now under Tropical Cyclone Warnings as Ethel approaches and strengthens.

When Aqua passed over newborn Ethel at 09:30 UTC (4:30 a.m. EST) on Jan. 19, the Moderate Resolution Imaging Spectroradiometer (MODIS) instrument aboard Aqua captured a visible image of the storm, and showed that it had good circulation. The strongest storms appear to be around the center and northwest of center. Bands of thunderstorms from the east-southeast appear to spiral into Ethel's center on the MODIS satellite imagery.

Currently, Ethel threatens the island of Rodrigues. Rodrigues is the smallest of the Mascarene Islands and was home to 40,000 people in 2006. It is a dependency of Mauritius. According to Wikipedia, it is located 348 miles (560 km) east of Mauritius island. It is surrounded by a coral reef and about 43 square miles (109 km²).

The Mauritus Meteorological Service (MMS) has posted a tropical cyclone class two warning for Rodrigues. A class two warning means that within 12 hours, the warning area will likely experience hurricane-force wind gusts of 75 mph (120 kilometers) per hour. The MMS calls for downpours and gusty winds today, with rain becoming heavier and more frequent on January 20. Sustained winds are expected to be near 25 mph (40 kmh) with gusts as high as 56 mph (90 kmh) during the evening hours on Jan. 19, 2012. Seas are expected to be rough. For updates in French and Creole, visit: http://metservice.intnet.mu/?page_id=625.

Because Ethel is in an area with warm sea surface temperatures (warmer than the 80F/26.6C threshold needed to maintain a tropical cyclone) and low wind shear, she is expected to strengthen quickly into hurricane (cyclone) strength. Afterward, Ethel is expected to encounter increased wind shear conditions which will again weaken the storm.

The cyclone is forecast to intensify rapidly to hurricane strength before adverse atmospheric conditions prompt a weakening trend. 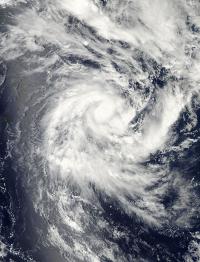