Powerful Cyclone Funso is now beginning to exit the Mozambique Channel, and NASA's Aqua satellite captured a stunning image of the storm that shows the depth and extent of it.

NASA's Aqua satellite passed over Tropical Cyclone Funso on January 26 at 1110 UTC (6:10 a.m. EST). The Moderate Resolution Imaging Spectroradiometer, better known as the MODIS instrument captured a true color image of the storm that showed a 25 nautical-mile-wide (29 miles/~46 km) eye, and clouds swirling down into it. The outer extent of Funso's clouds skirted Madagascar to the east, and Mozambique to the west.

Funso is expected to maintain cyclone strength over the next couple of days as it moves out of the Mozambique Channel and into the open waters of the Southern Indian Ocean, where it will begin to weaken. 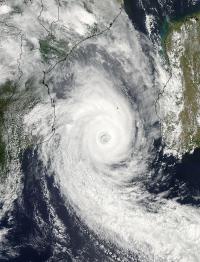