Tropical Storm Heidi is forecast to make landfall today along the Pilbara coast of Western Australia as warnings pepper the coast. NASA's Aqua satellite passed overhead early in the day and captured a visible image showing Heidi's center still north of the Pilbara coast, while her outer bands continue to bring rainfall and gusty winds to coastal residents.

NASA's Aqua satellite passed over Heidi on January 11, 2012 at 02:30 UTC (Jan. 10 at 10:30 a.m. EST) and the Moderate Resolution Imaging Spectroradiometer captured a visible image of the storm. The image showed that Heidi maintained her well-rounded shape and her center was just north of the Pilbara Coast of Western Australia at that time.

NASA's Atmospheric Infrared Sounder (AIRS) instrument captured an image of Heidi at the same time as the MODIS instrument because they fly aboard the same satellite. The infrared data showed that Heidi was becoming more tightly wound. Forecasters using the AIRS data at the Joint Typhoon Warning Center noted that there is "convection gathering more directly over the top of the system."

Heidi is expected to strengthen a little more before making landfall because it's in an area of low vertical wind shear (winds that can weaken a storm or tear it apart) and sea surface temperatures warmer than needed to maintain a tropical cyclone. The sea surface temperatures off the Pilbara coast are near 30 degrees Celsius (86 F) and only 26.6C (80F) is needed to sustain a tropical cyclone. Anything warmer adds power to the cyclone through evaporation.

The ABM's forecast track for Heidi can be seen on their website at: http://www.bom.gov.au/products/IDW60281.shtml. 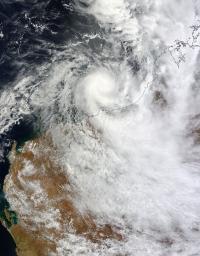