NASA satellites got a look inside Tropical Storm Heidi over the last several days and provided data that enabled forecasters at the Joint Typhoon Warning Center to know she was going to strengthen before making landfall, and she did.

Two instruments on NASA's Aqua satellite and two instruments on NASA's TRMM satellite provided forecasters with the rate at which rain was falling within Heidi, cloud heights and cloud and sea surface temperatures. All of those factors are added together to determine the behavior of a tropical cyclone. NASA data showed warm sea surface temperatures giving power to Heidi before landfall, and showed rainfall intensifying, indicating the tropical storm was gaining strength. Cloud heights and temperatures also clue forecasters in on a tropical storm's behavior, as the higher and colder the cloud tops, the more uplift (strength) and stronger the storm.

Heidi continues to weaken as it moves further inland and is expected to be below Tropical Cyclone intensity later this afternoon or evening.

Over the days of January 10, 11, 12, 2012, infrared data from the Atmospheric Infrared Sounder (AIRS) instrument on NASA's Aqua satellite showed cloud top temperatures growing increasingly colder (purple is the coldest, greater than -63F) as Heidi strengthened and approached the Pilbara coastline. The images were taken at 16:59 UTC on Jan. 10; at 17:47 UTC on Jan. 11; and at 5:53 UTC on Jan. 12, 2012. When NASA's Aqua satellite passed over Heidi on January 12, another instrument aboard called the Moderate Resolution Imaging Spectroradiometer (MODIS) captured a visible image of the storm. The image showed that Heidi maintained her well-rounded shape and even appeared to hint at an eye in the center after making landfall on the Pilbara Coast of Western Australia.

NASA's Tropical Rainfall Measuring Mission (TRMM) satellite provides measurement of rainfall rates and cloud heights in the tropics, and both of those are very important in forecasting tropical cyclone behavior. TRMM measured the rainfall within Heidi on January 10 and 12 and noticed more areas of heavy rain on the twelfth as the storm intensified.

On January 10, 2012 at 1544 UTC (10:44 a.m. EST) the TRMM satellite passed above tropical storm Heidi as it was forming off the northwestern coast of Australia. Heidi is the first named tropical cyclone to hit Australia this season. An analysis of rainfall from TRMM Microwave Imager (TMI) and Precipitation Radar (PR) data showed that Heidi was starting to get organized with bands of heavy convective rainfall spiraling toward the center of the storm. Heidi was dropping rainfall at a rate of over 50mm/hr (~2 inches) in some areas.

In a 3-D image created by TRMM data on January 12, some powerful storms within Heidi were reaching heights above 15km (9.3 miles). Rainfall data from TRMM PR data revealed that Heidi's location was defined by a rain band circling the center of the storm. This analysis also showed that very heavy rainfall from Heidi's outer bands was hitting the Australian coast.

Heidi caused several thousand power outages in its passage. Over 4 inches (100 millimeters) of rainfall was reported near Hedland, causing flooding. There were some reports of isolated totals as high as almost 8 inches (200 millimeters) Of course, rivers and stream flooding may continue for a couple of days.

According to the Australian Broadcasting Corporation, Tropical Storm Heidi was Hedland's first cyclone since 2007. That's when Cyclone George hit the region and made landfall in the same exact location. George was a category four storm and Heidi reached Category 2. Heidi is now a remnant low pressure area far inland near Paraburdoo. 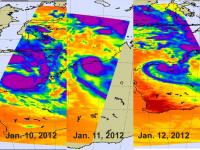 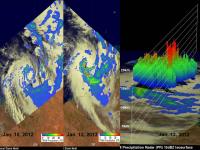 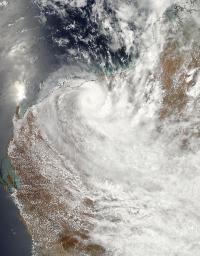