The findings, led by Horacio Espinosa, James N. and Nancy J. Farley Professor in Manufacturing and Entrepreneurship at the McCormick School of Engineering and Applied Science, were published online Dec. 22 in Nano Letters.

Gallium nitride (GaN) is among the most technologically relevant semiconducting materials and is ubiquitous today in optoelectronic elements such as blue lasers (hence the blue-ray disc) and light-emitting-diodes (LEDs). More recently, nanogenerators based on GaN nanowires were demonstrated capable of converting mechanical energy (such as biomechanical motion) to electrical energy.

"Although nanowires are one-dimensional nanostructures, some properties - such as piezoelectricity, the linear form of electro-mechanical coupling - are three-dimensional in nature," Espinosa said. "We thought these nanowires should show piezoelectricity in 3D, and aimed at obtaining all the piezoelectric constants for individual nanowires, similar to the bulk material."

"The measurements were very challenging, since we needed to accurately measure displacements 100 times smaller than the size of the hydrogen atom," said Majid Minary, a postdoctoral fellow and the lead author of the study.

These results are exciting especially considering the recent demonstration of nanogenerators based on GaN nanowires, for powering of self-powered nanodevices. 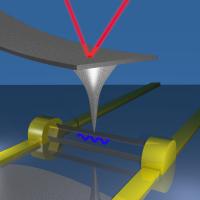