A novel technique has been developed and demonstrated at Penn State University to map the proteins that read and regulate chromosomes -- the string-like structures inside cells that carry genes. The specific order in which these proteins attach DNA-containing nucleosomes along the chromosome determines whether a brain cell, a liver cell, or a cancer cell is formed. Until now, it has been exceedingly difficult to determine exactly where such proteins bind to the chromosome, and therefore how they work. The new technique precisely pinpoints their location, and has the potential to take high-resolution snapshots of proteins as they regulate or miss-regulate an entire genome. The research will be published on 18 January 2012 as an Advance Online Publication in the journal Nature <www.nature.com>. Related research by the Penn State scientists recently was published in the journal Cell.

The research process, lead by Willaman Professor of Molecular Biology B. Franklin Pugh with Graduate Student Ho Sung Rhee, began by their using a molecular tool called an exonuclease to remove DNA that is not bound by one of the gene-regulating proteins. They then determined the nucleotide sequence for each of the remaining protein-bound DNA bundles -- the sequence of the four major component bases of DNA, labeled A, T, C, and G. "The advantage over other techniques of this technique, called ChIP-exo, is its ability to narrow down any binding location across millions and billions of nucleotide genomes to a certainty of about one nucleotide," Pugh said. "This improvement is roughly analogous to going from a low-resolution 240p television to a high-definition 1080p home-theater system. It provides an unprecedented view into how genes are regulated."

The ChIP-exo technique also removes a substantial amount of noise in the detection system that plagues other methods. The lower-noise technique reveals 2-to-5 times more binding locations, providing a much-more-complete picture of which genes are regulated by a particular protein, as well as a broader understanding of their structural organization across genomes. Having a more-complete picture allows scientists to understand in more detail how gene pathways work in normal human development, or fail to work in disease.

A high-resolution image associated with this research is online at http://science.psu.edu/news-and-events/2012-news/Pugh1-2012. 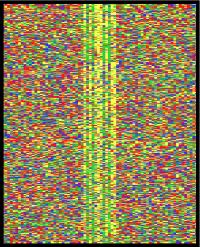