Troy, N.Y. - Even the tiniest microscopic organisms make waves when they swim. In fact, dealing with these waves is a fact of life for the ulcer-causing bacteria H. pylori.

The bacteria are known to change their behavior in order to compensate for the waves created by other bacteria swimming around in the same aquatic neighborhood. From the relatively simple actions of these individual bacteria emerges a complex, coordinated group behavior.

A new study by engineering researchers at Rensselaer Polytechnic Institute demonstrates how introducing certain polymers--like those found in human mucus and saliva--into the environment makes it significantly more difficult for H. pylori and other microorganisms to coordinate. The findings raise many new questions about the relationship between the individual and group behaviors of bacteria. The study also suggests that human mucus, saliva, and other biological fluid barriers may have evolved to disrupt the ability of harmful bacteria to coordinate.

"In the human body, microorganisms are always moving around in mucus, saliva, and other systems that exhibit elasticity due to the presence of polymers. Our study is among the first to look at how this elasticity impacts the collective behavior of microorganisms like H. pylori," said lead researcher Patrick T. Underhill, assistant professor in the Howard P. Isermann Department of Chemical and Biological Engineering at Rensselaer. "What we found is that polymers do in fact have a substantial impact on the flows created by the swimming bacteria, which in turn makes it more difficult for the individual bacteria to coordinate with each other. This opens the door to new ways of looking at our immune system."

Results of the study are detailed in the paper "Effect of viscoelasticity on the collective behavior of swimming microorganisms," recently published by the journal Physical Review E. See the paper online at: http://link.aps.org/doi/10.1103/PhysRevE.84.061901

Underhill's study, based on large-scale computer simulations, leveraged the power of the Rensselaer Computational Center for Nanotechnology Innovations (CCNI), one of the world's most powerful university-based supercomputers. These simulations involved creating a computer model of more than 110,000 individual H. pylori bacteria simultaneously occupying a small volume of polymer-infused liquid. The simulations captured all of the individual actions and interactions created as the bacteria swam through the liquid. The most difficult aspect of this kind of simulation, Underhill said, is to identify collective behaviors and extract relevant conclusions from the massive amount of data generated.

See a video of a simulation at: http://youtu.be/Yvc_3xncpME

In addition to computer simulations, Underhill employed theoretical models to understand how the addition of elasticity to liquid impacts the waves created by swimming H. pylori and, in turn, the collective behavior of a large group of the bacteria. Bacteria like H. pylori are known as pushers, as they propel themselves through water by twisting the long helical filaments that trail behind them.

Rensselaer chemical engineering graduate student Yaser Bozorgi is a co-author of the paper.

For more information on Underhill's research at Rensselaer, visit: 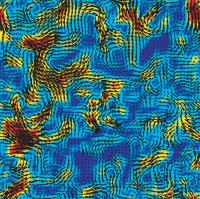