One day in 2010, Rutgers physicist Vitaly Podzorov watched a store employee showcase a kitchen gadget that vacuum-seals food in plastic. The demo stuck with him. The simple concept - an airtight seal around pieces of food - just might apply to his research: developing flexible electronics using lightweight organic semiconductors for products such as video displays or solar cells.

"Organic transistors, which switch or amplify electronic signals, hold promise for making video displays that bend like book pages or roll and unroll like posters," said Podzorov. But traditional methods of fabricating a part of the transistor known as the gate insulator often end up damaging the transistor's delicate semiconductor crystals.

Drawing inspiration from the food-storage gadget, Podzorov and his colleagues tried an experiment. They suspended a thin polymer membrane above the organic crystal and created a vacuum underneath, causing the membrane to collapse gently and evenly onto the crystal's surface. The result: a smooth, defect-free interface between the organic semiconductor and the gate insulator.

The researchers reported their success in the journal Advanced Materials. In the article, Podzorov and three colleagues describe how a single-crystal organic field effect transistor (OFET) made with this thin polymer gate insulator boosted electrical performance. The researchers further reported that they could remove and reapply membranes to the same crystal several times without degrading its surface.

The methods that scientists previously applied to organic transistor fabrication were based on silicon semiconductor processing, explained Podzorov, assistant professor in the Department of Physics and Astronomy, School of Arts and Sciences. These involved high temperatures, high-energy plasmas or chemical reactions, all of which could damage the delicate organic crystal surface and hinder the transistor's performance.

"People have tendencies to go with something they've known for a long time," he said. "In this case, it doesn't work right."

Podzorov's innovation builds upon a decade of Rutgers research in this field, including his invention of the first single crystal organic transistor in 2003. While his latest innovation is still a ways from commercial reality, he sees an immediate application in the classroom.

"Our technique takes 10 minutes," he said. "It should be exciting for students to actually build these devices and immediately see them work, all within one lab session."

Podzorov was actually trying to solve another problem when he first recalled the food packaging demo. He was thinking about how to protect organic crystals from airborne impurities when his lab shipped samples to collaborating scientists in California and overseas.

"We could place our samples between plastic sheets and pull a vacuum," he said. "Then I thought, 'why don't we try doing this for our gate insulator?'"

Funding for the research was provided by the U. S. Department of Energy and the Rutgers Institute for Advanced Materials and Devices for Nanotechnology. Collaborators in Podzorov's lab were postdoctoral researchers Hee Taek Yi and Yuanzhen Chen, and undergraduate student Krzysztof Czelen. The department's machine shop made a custom-designed vacuum chamber for the project. 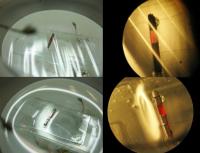