In a report receiving advance online publication in the journal Nature Biotechnology, the team reports that inhibiting a type of cell-to-cell communication can protect against damage caused by liver-toxic drugs such as acetaminophen.

"Our findings suggest that this therapy could be a clinically viable strategy for treating patients with drug-induced liver injury," said Suraj Patel a postdoctoral researcher in the Center for Engineering in Medicine at MGH and the paper's lead author. "This work also has the potential to change the way drugs are developed and formulated, which could improve drug safety by providing medications with reduced risk of liver toxicity."

Drug-induced liver injury is the most common cause of acute liver failure in the U.S. and is also the most frequent reason for abandoning drugs early in development or withdrawing them from the market. Liver toxicity limits the development of many therapeutic compounds and presents major challenges to both clinical medicine and to the pharmaceutical industry.

The researchers investigated an approach that targets a liver's gap junctions - hollow multimolecular channels that connect neighboring cells and allow direct communication between coupled cells. In the heart, gap junctions propagate the electrical activity required for synchronized contraction, but their role in the liver has not been well understood

The researchers first used a strain of genetically mutated mice that lack a particular liver-specific gap junction. The mice were administered various liver-toxic drugs such as acetaminophen, a commonly used medication best known under the Tylenol brand name. Acetaminophen overdoses are the most frequent cause of drug-induced liver injury.

Compared to normal mice, those lacking liver gap junctions were fully protected against liver damage, inflammation and death caused by administration of liver-toxic drugs. The team then identified a small-molecule inhibitor of liver gap junctions that, when given with or even after the toxic drugs, protected the livers of normal mice against injury and prevented their death.

"This finding is very exciting and potentially very powerful from a number of basic science and clinical application standpoints, which we are continuing to explore," said Martin Yarmush, senior author of the report and the Paul and Mary Monroe Professor of Biomedical Engineering at Rutgers. "However, before we can think about applying this approach to patients, we need to know more about any off-target effects of gap junction inhibitors and better understand the long-term ramifications of temporarily blocking liver-specific gap junction channels."

Other co-authors of the study are Jack Milwid, Kevin King, Stefan Bohr, Arvin Iracheta-Vellve, Matthew Li, Antonia Vitalo and Biju Parekkadan of MGH, and Rohit Jindal of Rutgers. The work was supported by grants from the National Institutes of Health and Shriners Hospitals for Children. 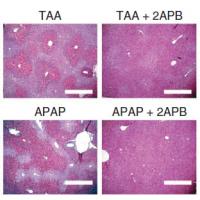