HOUSTON -- (Jan. 26, 2012) -- Like a magician employing sleight of hand, the protein mitoNEET -- a mysterious but important player in diabetes, cancer and aging -- draws the eye with a flurry of movement in one location while the subtle, more crucial action takes place somewhere else.

Using a combination of laboratory experiments and computer modeling, scientists from Rice University and the University of California, San Diego (UCSD) have deciphered part of mitoNEET's movements to get a better understanding of how it handles its potentially toxic payload of iron and sulfur. Their research is described this week in the Proceedings of the National Academy of Sciences.

"We scrutinize proteins with an unconventional approach," said José Onuchic, Rice's Harry C. and Olga K. Wiess Professor of Physics and Astronomy and co-director of the Center for Theoretical Biological Physics. "We use biophysics to probe biology rather than the other way around. Using computational theory, we find structures that are possible -- regardless of whether they've already been observed experimentally -- and we ask ourselves whether these structures might be biologically significant."

Study co-leader Patricia Jennings, professor of chemistry and biochemistry at UCSD, who has collaborated with Onuchic for 15 years, said they save a great deal of time by using structural biophysics to guide their experiments on a wide variety of targets. For example, Jennings' laboratory determined less than five years ago that mitoNEET contained a novel folded structure. Since then, her lab has been using insights gained from static and dynamic snapshots of the protein to guide biological and biochemical studies.

"I think people forget that proteins are machines with moving parts," said study lead author Elizabeth Baxter, a UCSD graduate student who works under the guidance of both Onuchic and Jennings. "We start with the static snapshot and model in the functional motions."

MitoNEET, which binds to the diabetes drug, Actos, immediately caught the attention of researchers when it was discovered. It has a unique ability to bind and store iron-based molecules in an iron-sulfur cluster. Iron is an essential element for all life, but it is also highly toxic, and mitoNEET is the only iron-handling protein that is known to sit on the wall of the mitochondria, one of the key structures inside a cell.

The protein's biological functions are still being unraveled. Interestingly, scientists have shown that mitoNEET sits on the outer mitochondrial wall with its potentially toxic payload of iron-sulfur molecules facing toward the cell's cytoplasm, the gel-like fluid that fills the cell. Discovery of the unique binding mode of the protein's iron-sulfur cluster led the Jennings group to show that the cluster can be delivered into the mitochondria. In addition, its sister protein interacts with proteins that participate in apoptosis -- the process cells use to kill themselves when they are no longer viable.

"I think mitoNEET is a protein that could be your best friend or your worst enemy," Jennings said. "There's some evidence that it may act as a sensor for oxidative stress and that it can lose its toxic iron-sulfur cluster under stress conditions. Depending upon where the iron ends up, that could lead to drastic problems inside the cell."

Proteins are strands of amino acids that are produced from DNA blueprints, but their shapes can provide important clues about their function. To find out how mitoNEET's control and release of its iron-sulfur payload might be related to its shape, Baxter used computer simulations to study how the protein folds, as well as the functional motions of two similar shapes that could be biologically important. In one of these shapes, there is a slight intertwining of two arms that extend away from the iron-cluster pocket. In the other, the arms also extend but are not intertwined.

Baxter found that both conformations were physically possible. She also found the protein could switch between the "strand-swapped" and "strand-unswapped" conformations without entirely unfolding. Moreover, this change in the twining of the arms was shown to alter the shape of the critical pocket that holds the iron-sulfur cluster; this makes the cluster more likely to be inserted or released in situations where the arms are untwined.

Like the magician using misdirection, the loosening of the grip on the cluster is subtle and happens in a different location than the flurry of arm motions. Jennings said it's the kind of thing that could easily be missed if the focus of the study were the cluster itself.

Onuchic said, "One of the advantages to our approach is that it allows us to look for relevant biophysical properties that control distant functional regions -- like mitoNEET's strand-swapping -- that can easily be missed with a more conventional approach."

Located on a 300-acre forested campus in Houston, Rice University is consistently ranked among the nation's top 20 universities by U.S. News & World Report. Rice has highly respected schools of Architecture, Business, Continuing Studies, Engineering, Humanities, Music, Natural Sciences and Social Sciences and is known for its "unconventional wisdom." With 3,708 undergraduates and 2,374 graduate students, Rice's undergraduate student-to-faculty ratio is less than 6-to-1. Its residential college system builds close-knit communities and lifelong friendships, just one reason why Rice has been ranked No. 1 for best quality of life multiple times by the Princeton Review and No. 4 for "best value" among private universities by Kiplinger's Personal Finance. To read "What they're saying about Rice," go to www.rice.edu/nationalmedia/Rice.pdf. 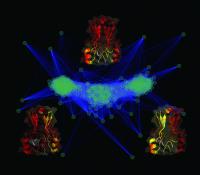