How James Watt Invented the Copier features 25 different scientists and the ideas which may not have made them famous, but made history...

Typically, we remember our greatest scientists from one single invention, one new formula or one incredible breakthrough. This narrow perspective does not give justice to the versatility of many scientists who also earned a reputation in other areas of science.

James Watt, for instance, is known for inventing the steam engine, yet most people do not know that he also invented the copier. Alexander Graham Bell of course invented the telephone, but only few know that he invented artificial breathing equipment, a prototype of the 'iron lung.' Edmond Halley, whose name is associated with the comet that visits Earth every 75 years, produced the first mortality tables, used for life insurance.

This entertaining book by René Schils is aimed at anyone who enjoys reading about inventions and discoveries by the most creative minds. Detailed illustrations of the forgotten designs and ideas enrich the work throughout.

Since 2005, René Schils has been a freelance science writer and in the past five years has written nearly 20 articles on forgotten inventions of great scientists for the Dutch science magazine 'Natuurwetenschap en Techniek.' Subsequently, these articles were used as the basis for How James Watt Invented the Copier. Currently, René writes popular science articles on varying topics for several science magazines, which can be viewed at the author's website www.reneschils.nl.

How James Watt invented the copier 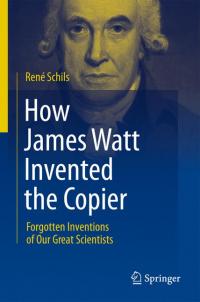