Using data from NASA's Kepler Mission, astronomers announced the discovery of two new transiting "circumbinary" planet systems - planets that orbit two stars. This work establishes that such "two sun" planets are not rare exceptions, but are in fact common with many millions existing in our Galaxy. The work was published on-line today in the journal Nature and was presented by Dr. William Welsh of San Diego State University at the American Astronomical Society meeting in Austin, TX on behalf of the Kepler Science Team.

The two new planets, named Kepler-34 b and Kepler-35 b, are both gaseous Saturn-size planets.

Kepler-34 b orbits its two Sun-like stars every 289 days, and the stars themselves orbit and eclipse each other every 28 days. The eclipses allow a very precise determination of the stars' sizes. Kepler-35 b revolves about a pair of smaller stars (80 and 89 percent of the Sun's mass) every 131 days, and the stars orbit and eclipse one another every 21 days. Both systems reside in the constellation Cygnus, with Kepler-34 at 4900 light-years from Earth, and Kepler-35 at 5400 light-years, making these among the most distant planets discovered.

While long anticipated in both science and science fiction, the existence of a circumbinary planet orbiting a pair of normal stars was not definitively established until the discovery of Kepler-16 b, announced by the Kepler Team last September. Like Kepler-16 b, these new planets also transit (eclipse) their host stars, making their existence unambiguous. When only Kepler-16 b was known, many questions remained about the nature of circumbinary planets - what kinds of orbits, masses, radii, temperatures, etc., could they have? And most of all, was Kepler-16 b just a fluke? With the discovery of Kepler-34 b and 35 b, astronomers can now answer many of those questions and begin to study an entirely new class of planets. "It was once believed that the environment around a pair of stars would be too chaotic for a circumbinary planet to form, but now that we have confirmed three such planets, we know that it is possible, if not probable, that there are at least millions in the Galaxy," said Welsh, who led the team of 46 investigators involved in this research.

Dr. Laurance Doyle of the SETI Institute, co-author of this paper and lead-author of the Kepler-16 discovery, further stated, "With this paper, the new field of comparative circumbinary planetology is now established."

The discovery was made possible by the three unique capabilities of the Kepler space telescope: its ultra-high precision, its ability to simultaneously observe roughly 160,000 stars, and its long-duration near-continuous measurements of the brightness of stars. Additional work using ground-based telescopes provided velocity measurements of the stars needed to confirm that these candidates are really planets.

"The search is on for more circumbinary planets," said co-author Dr. Joshua Carter of the Harvard-Smithsonian Center for Astrophysics, "and we hope to use Kepler for years to come."

A circumbinary planet has two suns, not just one. The distances between the planet and stars are continually changing due to their orbital motion, so the amount of sunlight the planet receives varies dramatically.

"These planets can have really crazy climates that no other type of planet could have," said Dr. Jerome Orosz, a co-author from San Diego State University. "It would be like cycling through all four seasons many times per year, with huge temperature changes."

Welsh adds, "The effects of these climate swings on the atmospheric dynamics, and ultimately on the evolution of life on habitable circumbinary planets, is a fascinating topic that we are just beginning to explore."

Funding for this work was provided in part by NASA and the National Science Foundation.

For full-resolution versions of the artwork and animation, see http://sdsu.edu/kepler. 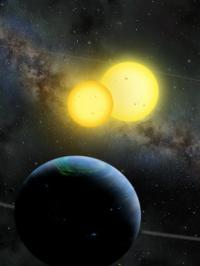 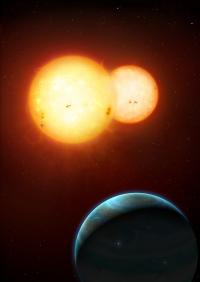 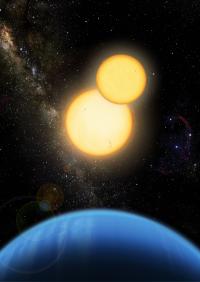