A new method for identifying bacteria that cause urinary tract infections (UTIs) will lead to much faster, more effective treatment as well as a reduction in costs. The procedure, described in the Journal of Medical Microbiology, could eventually be used for the identification of micro-organisms in other bodily fluids, including blood and spinal fluid.

Currently, bacteria from urine are identified by biochemical testing of the bacterial colonies that are able to grow on agar plates. This standard method is not ideal; in the best case scenario, results are available after 12 hours, but longer waiting times are not uncommon. If the patient has already been treated with antibiotics, this can impair bacterial growth on agar which increases the probability of misclassification. If doctors are unable to precisely identify the bacterium causing the UTI, a broad spectrum antibiotic is prescribed. These are less effective than specifically targeted antibiotics and also encourage development of antibiotic resistance.

The MALDI-TOF technique identifies bacteria by analysing their proteins directly from the urine sample. MALDI-TOF mass spectrometry works by firing pulses of UV light at biological samples. All the particles become either positively or negatively charged and are then forced down a tunnel by an electrical force. As the particles have the same charge, their speed is dependent on their mass, allowing biomolecules such as proteins or DNA to be identified. As bacteria do not need to be cultured on agar, the MALDI-TOF method cuts the time to identify UTI-causing bacteria to less than 30 minutes. In addition, MALDI-TOF can detect and identify bacteria at much lower levels than are needed for current standard diagnostic techniques.

Dr Frank Mosel who led the study, believes the MALDI-TOF method will have huge benefits for patients that suffer from UTIs. "Identifying bacteria quickly and accurately using MALDI-TOF means treatment for UTIs can be started at an early stage and with an antibiotic targeted at the correct bacterial culprit. This should mean less patient suffering, fewer complications and a reduction in costs of both diagnosis and therapy," he stated. "What's more, the sensitivity of the test is nearly 100 times higher than the minimum clinical threshold for UTI diagnosis. This means that developing infections can be identified in routine urine samples before clinical symptoms appear. This is particularly helpful for catheterised hospital patients who may have weakened immune systems and be therefore more susceptible to infection," explained Dr Mosel.

The study revealed some limitations in the use of MALDI-TOF to identify bacteria causing UTIs. "Bacteria in urine samples from patients who had undergone surgery for lower urinary tract (e.g. bladder) cancers could not be detected. The human proteins produced interfere with the urine analysis, causing detection problems," said Hedda Köhling, the co-worker of Dr Mosel. "It is important to find out if there are other situations which compromise the effectiveness of the MALDI-TOF method," she said.

Dr Mosel believes that the use of MALDI-TOF mass spectrometry could be extended more widely as a medical analysis tool. "This method could quite feasibility be extended to blood, cerebrospinal fluid and other bodily fluids to detect bacteria or even fungi," he said. "One of the big advantages is that every sample can be processed independently without any prior assumptions about what microbes will be found," said Dr Mosel. 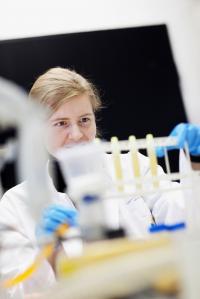 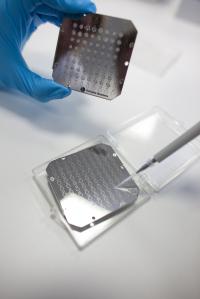 Bacteria Being Deposited on a Metal Plate (IMAGE)
view more