This press release is available in German and French.

Today's office workplaces are designed to be as ergonomic as possible. Even so, after hours of hunching over a desk it does you good to stand up, stretch your legs and relax your back. Spending a whole day in practically the same cramped position is a very tiring proposition.

Wheelchair users in particular face the problem of being forced to spend long periods in the same position. The result can be pain, deformities and decubitus ulcers (or bedsores). The engineer and ergotherapist Roger Hochstrasser, founder of the company «r going», wanted to help improve this situation. He took his idea for a novel seat shell to Bernard Weisse, an Empa engineer together with whose team Hochstrasser had previously worked very successfully. The newly developed seat was intended to improve the ergonomics of the wheelchair and thereby save the cost of additional treatment.

From concept to realization

Within 18 months Empa and «r going» completed the development of the innovative seat and constructed the first prototype in a project financed by the Swiss Confederation's Commission for Technology and Innovation. The new seat shell has an articulated backrest constructed of of ribs and movable joints which are designed to match the contours of the user's torso. Depending on the version, the backrest can be tilted up to 22° forwards and 40° backwards and seat can also be rotated by a good 30° in each direction horizontally. The wheelchair user is therefore strongly encouraged to keep changing his or her position, thereby shifting the location of the pressure points, as measurements with a pressure mat on the seat have shown.

Researchers from the Institute for Energy and Mobility of the Berne University of Applied Sciences have developed the drive concept and a control console which allows the ergotherapist to program the movements of the backrest so that the wheelchair user's sitting position is altered in an optimal fashion. "Despite this, if anyone should ever feel uncomfortable they can adjust the settings themselves at any time to suit their individual needs", explains Weisse. A particularly practical point is that the backrest is powered by the same 24 battery as drives the wheelchair.

The institution's grounds as a test track

Empa wouldn't be Empa if it hadn't given the new development a comprehensive practical test, in this case in its own grounds. Test users of various weights drove the wheelchair with its innovative new seat along gravel paths, up and down ramps and over kerbstones and cobbled roadways. A road trip in the Tixi-Taxi, a transport service for handicapped persons, with lots of curves included, served to evaluate the loads being placed on the backrest. All the tests were completed to Hochstrasser and Weisse's full satisfaction.

Clinical tests are planned for the near future. These will show whether the improved pressure data which was measured in the laboratory does actually lead to improvement in the well-being and health of the wheelchair users and whether the innovative seat gains full acceptance by those for whom it has been designed. 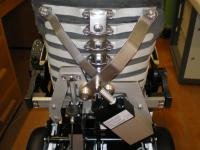