SAN FRANCISCO -- Honey bees can become the unwitting hosts of a fly parasite that causes them to abandon their hives and die after a bout of disoriented, "zombie-like" behavior, San Francisco State University researchers have found.

The phenomenon, first observed on the SF State campus, may help scientists learn more about colony collapse disorder (CCD). This mysterious ailment has drastically increased honey bee colony losses across the United States since its discovery in 2006.

So far, the fly parasite has only been found in honey bee hives in California and South Dakota, said SF State Professor of Biology John Hafernik. But the possibility that it is an emerging parasite "underlines the danger that could threaten honey bee colonies throughout North America, especially given the number of states that commercial hives cross and are deployed in," Hafernik and colleagues write in the January 3, 2012 issue of PLoS ONE.

Hafernik, who also serves as president of the California Academy of Sciences, didn't set out to study the parasitized bees. In 2008, he was just looking for some insects to feed the praying mantis that he had brought back to SF State's Hensill Hall after an entomology field trip. He scrounged the bees from underneath the light fixtures outside the biology building.

"But being an absent-minded professor," Hafernik joked, "I left them in a vial on my desk and forgot about them. Then the next time I looked at the vial, there were all these fly pupae surrounding the bees."

The fly, Apocephalus borealis, deposits its eggs into a bee's abdomen. Usually about seven days after the bee dies, fly larvae push their way into the world from between the bee's head and thorax. But it's the middle part of this macabre story that may be the most scientifically interesting to those studying the dramatic and mysterious disappearance of honey bees.

After being parasitized by the fly, the bees abandon their hives in what is literally a flight of the living dead to congregate near lights. "When we observed the bees for some time--the ones that were alive--we found that they walked around in circles, often with no sense of direction," said Andrew Core, an SF State graduate student from Hafernik's lab who is the lead author on the study.

Core won first place at the 2011 California State University Research Competition and the Geraldine K. Lindsay Award for excellence in the natural sciences at the annual meeting of the Pacific Division of the American Association for the Advancement of Science for his presentation of the bee research.

Bees usually just sit in one place, sometimes curling up before they die, said Core. But the parasitized bees were still alive, unable to stand up on their legs. "They kept stretching them out and then falling over," he said. "It really painted a picture of something like a zombie."

Bees that left the hives at night were more likely to bear the parasite than those who foraged during the day, the researchers found. Genetic tests of parasitized hives also showed that both bees and flies were often infected with deformed wing virus and a fungus called Nosema ceranae.

Some researchers have pointed to the virus and fungus as potential culprits in colony collapse disorder, and hive abandonment is the primary characteristic of the disorder. It may be time, Hafernik said, to consider how the fly parasite fits into the CCD picture.

He said the next step is to find out exactly how the parasite is affecting the bees' behavior. It is possible, he said, that the parasite is somehow interfering with the bees' "clock genes" that help them keep a normal day-night rhythm.

The researchers also don't know if the infected bees are leaving the hive of their own accord, or whether they give off some sort of chemical signal that provokes their hive mates into throwing them out. "A lot of touching and tasting goes on in a hive," Hafernik said, "and it's certainly possible that their co-workers are finding them and can tell that there's something wrong with them."

The scientists will deploy a range of tools -- from tiny radio tags to video monitoring -- to help them answer these questions and discover ways to protect the hives.

"We don't know the best way to stop parasitization, because one of the big things we're missing is where the flies are parasitizing the bees," Hafernik noted. "We assume it's while the bees are out foraging, because we don't see the flies hanging around the bee hives. But it's still a bit of a black hole in terms of where it's actually happening."

Genetic analysis of the parasites confirmed that they are the same flies that have been infecting bumblebees, raising the possibility that the fly is an emerging and potentially costly new threat to honey bees.

"Honey bees are among the best-studied insects in the world," Hafernik noted. "So at one level, we would expect that if this has been a long-term parasite of honey bees, we would have noticed." 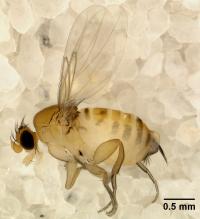