LA JOLLA, CA - January 31, 2012 - For decades, chemists considered a chemical pathway known as the formose reaction the only route for producing sugars essential for life to begin, but more recent research has called into question the plausibility of such thinking. Now a group from The Scripps Research Institute has proven an alternative pathway to those sugars called the glyoxylate scenario, which may push the field of pre-life chemistry past the formose reaction hurdle.

The team is reporting the results of their highly successful experiments online ahead of print in the Journal of the American Chemical Society.

"We were working in uncharted territory," says Ramanarayanan ("Ram") Krishnamurthy, a Scripps Research chemist who led the research, "We didn't know what to expect but the glyoxylate scenario with respect to formation of carbohydrates is not a hypothesis anymore, it's an experimental fact."

The quest to recreate the chemistry that might have allowed life to emerge on a prehistoric Earth began in earnest in the 1950s. Since that time researchers have focused on a chemical path known as the formose reaction as a potential route from the simple, small molecules that might have been present on the Earth before life began to the complex sugars essential to life, at least life as we know it now.

The formose reaction begins with formaldehyde, thought to be a plausible constituent of a prebiotic world, going through a series of chemical transformation leading to simple and then more complex sugars, including ribose, which is a key building block in DNA and RNA.

But as chemists continued to study the formose reaction they realized that the chemistry involved is quite messy, producing lots of sugars with no apparent biological use and only the tiniest bit of ribose. As such experimental results mounted, the plausibility of the formose reaction as the prebiotic sugar builder came into question. But the problem was that no one had established a reasonable alternative.

Then in 2007, Albert Eschenmoser, an organic chemist who recently retired from Scripps Research, proposed a new pathway he dubbed the glyoxylate scenario. This involved glyoxylate as an alternative starting point to formaldehyde, and reactions with dihydroxyfumarate (DHF) that Eschenmoser hypothesized could launch a cascade of reactions that would lead to sugars. Glyoxylate was a good starting point because of the possibility that it could be produced by oligomerization of carbon monoxide under potentially prebiotic conditions.

Eschenmoser and Krishnamurthy began developing the experiments to test the hypothesis. At the time, very little was known about relevant reactions involving DHF, and nothing beyond theory about how it reacted with glyoxylate.

The idea that DHF might be involved in a plausible biosynthetic pathway to sugars (via a decarboxylative conversion to glycolaldehyde which aldolizes to sugars) dates back about as far as work on the formose reaction, but the experiments proved otherwise, causing DHF to fall from focus.

"We were thrown a lot of curve balls we had to really think through," said Krisnamurthy of the years he spent working with postdoctoral fellow Vasu Sagi, who is lead author of the new paper. The team's experiments revealed that under the right conditions, DHF and glyoxylate, when in the presence of a few other plausible prebiotic chemicals including formaldehyde, would produce sugars known as ketoses. Ketoses in turn can be converted to critical sugars, including some essential to forming certain amino acids, the DNA and RNA building blocks such as ribose.

In remarkable contrast to the formose reaction, which might only convert a fraction of a percent of its starting materials into ribose, the experiments Sagi slaved over, sometimes monitoring them 24 hours a day, gave clean conversion of DHF to ketoses.

Such efficiency is so rare in prebiotic chemistry, and was so unexpected in the glyoxylate dihydroxyfumarate experiments, that the scientists were leery at first of their results. "We had to prove it by repeating the experiments many times," said Sagi, but the results held.

"Prebiotic reactions are usually pretty messy, so when we saw how clean this was we were really pleasantly surprised," said Krishnamurthy.

Interestingly, during the course of the work, Sagi and Krishnamurthy discovered DHF can react with itself to produce a new compounds never before documented, which the group reported separately late last year.

The Rest of the Story

Though the new research soundly proves the plausibility of one of the facets of the glyoxylate scenario, the chemistry involved is only one of three key series of reactions researchers will have to identify in order to complete a viable path from a primordial soup to life's building blocks.

While glyoxylate is a plausible prebiotic component, there's not yet a known prebiotic pathway to DHF, so the Krishnamurthy team is already working to identify possibilities.

A third critical conversion would have to occur after production of ketoses. Right now, the only known paths for the conversion of ketoses to ribose and other critical sugars are transformations by living organisms. Whether and how such conversion might have proceeded before life arose remains an open research question.

In addition to Sagi and Krishnamurthy, authors on the paper, titled, "Exploratory Experiments on the Chemistry of the Glyoxylate Scenario: Formation of Ketosugars from Dihydroxyfumarate," were Venkateshwarlu Punna, Fang Huf, and Geeta Meher," all from Scripps Research. For more information, see the study at http://pubs.acs.org/doi/abs/10.1021/ja211383c. 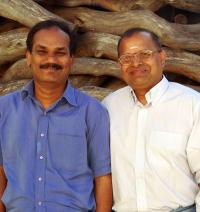