Meteorologists can see a busy hurricane season brewing months ahead, but until now there has been no such crystal ball for tornadoes, which are much smaller and more volatile. This information gap took on new urgency after tornadoes in 2011 killed more than 550 people, more than in the previous 10 years combined, including a devastating outbreak in April that racked up $5 billion in insured losses. Now, a new study of short-term climate trends offers the first framework for predicting tornado activity up to a month out with current technology, and possibly further out as climate models improve, giving communities a chance to plan. The study may also eventually open a window on the question of whether tornadoes are growing more frequent due to long-term climate warming.

"Understanding how climate shapes tornado activity makes forecasts and projections possible and allows us to look into the past and understand what happened," said lead author Michael Tippett, a climate scientist at Columbia University's International Research Institute for Climate and Society (IRI).

Packing winds of up to 300 miles per hour, tornadoes descend when warm, moist air collides with cold, dry air, creating a vortex as the two masses move around each other. The U.S. Midwest is the twister capital of the world, where cold air blowing east from the Rockies habitually hits tropical air moving north from the Gulf of Mexico. Tornadoes appear to be growing more frequent as climate warms, but it is uncertain whether there is a connection; they are small and hard to count, and recently improved reporting may also explain the increase.

Lack of an accurate long-term tornado record makes it hard to know the truth, and has also hampered scientists' ability to relate tornadoes to cyclical weather patterns that could aid in forecasting. While individual hurricanes can be spotted days in advance, tornadoes appear with much less warning. A tornado watch typically gives only a few hours' notice that dangerous conditions are brewing, while warning of an actual tornado bearing down may give people just a few minutes to get out of the way.

Tippett, a seasonal forecasting expert, had already built statistical models to understand how climate change might affect hurricanes by adding more heat and moisture to the air. But applying the same methods to something as tiny and complicated as a twister is trickier, said study coauthor Adam Sobel, an atmospheric scientist with joint appointments at Columbia's Lamont-Doherty Earth Observatory and School of Engineering and Applied Science. "A tornado is not a lot bigger than the house it has just destroyed," he said. "It's a small thing and short-lived."

Combing through 30 years of data, Tippett and his colleagues began looking for patterns linking climate and tornadoes. By comparing average atmospheric conditions with average monthly tornado counts in regions across the United States, they identified two parameters that seemed closely associated with monthly tornado activity: rain associated with strong updrafts; and helicity, which measures the tendency of winds to spin those updrafts.

They then looked to see if they could "predict" the tornado activity of individual months from 1979 to 2010 from a simple index based on each month's average wind and rain parameters. The index correlated significantly with the observed numbers of tornadoes in all months except September and October. Moreover, the National Oceanic and Atmospheric Administration (NOAA) system for making seasonal forecasts, known as the Climate Forecast System (CFS), was able to use the index to forecast monthly tornado activity with some success up to a month in advance. This success, especially notable in June, is the first evidence for the predictability of monthly tornado activity.

Harold Brooks, a NOAA tornado expert not involved in the study said the forecast technique worked where others have failed because the CFS produced higher resolution results. "The real breakthrough is that CFS is skillful enough at the right scale," he said. With greater lead time, communities and relief agencies could prepare, he said. "It's not like the hurricane problem where we can tell people to evacuate. But if I'm a state emergency manager I might be really interested in knowing at the end of March that by the end of April we could have a big problem. You could be better prepared with generators and supplies."

Tippett said the next steps are to improve the index's reliability in the fall; to better understand why the forecasts work; and to apply the index to projections of future climate. "Before you can use an index to diagnose future climate, you have to be confident that it explains the observed variability," he said.

Suzana Camargo, a climate and weather researcher at Lamont-Doherty Earth Observatory, also coauthored the study, which appears this week in the journal Geophysical Research Letters. 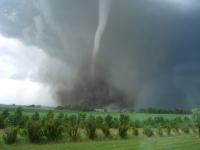