Graphene leaves a rather modest impression at a first sight. The material comprises nothing but carbon atoms ordered in a mono-layered "carpet". Yet, what makes graphene so fascinating for scientists is its extremely high conductivity. This property is particularly useful in the development of photodetectors. These are electronic components that can detect radiation and transform it into electrical signals.

Graphene's extremely high conductivity inspires scientists to utilize it in the design of ultra-fast photodetectors. However, until now, it was not possible to measure the optical and electronic behavior of graphene with respect to time, i.e. how long it takes between the electric stimulation of graphene and the generation of the respective photocurrent.

Alexander Holleitner and Leonhard Prechtel, scientists at the Walter Schottky Institut of the TU Muenchen and members of the Cluster of Excellence Nanosystems Initiative Munich (NIM), decided to pursue this question. The physicists first developed a method to increase the time resolution of photocurrent measurements in graphene into the picosecond range. This allowed them to detect pulses as short as a few picoseconds. (For comparison: A light beam traveling at light speed needs three picoseconds to propagate one millimeter.)

The central element of the inspected photodetectors is freely suspended graphene integrated into electrical circuits via metallic contacts. The temporal dynamics of the photocurrent were measured by means of so-called co-planar strip lines that were evaluated using a special time-resolved laser spectroscopy procedure - the pump-probe technique. A laser pulse excites the electrons in the graphene and the dynamics of the process are monitored using a second laser. With this technique the physicists were able to monitor precisely how the photocurrent in the graphene is generated.

At the same time, the scientists could take advantage of the new method to make a further observation: They found evidence that graphene, when optically stimulated, emits radiation in the terahertz (THz) range. This lies between infrared light and microwave radiation in the electromagnetic spectrum. The special thing about THz radiation is that it displays properties shared by both adjacent frequency ranges: It can be bundled like particle radiation, yet still penetrates matter like electromagnetic waves. This makes it ideal for material tests, for screening packages or for certain medical applications.

The research was funded by the German Research Foundation (DFG), the Excellence Cluster Nanosystems Initiative Munich and the Center for NanoScience (CeNS). Physicists from Universität Regensburg, Eidgenössische Technische Hochschule Zürich, Rice University and Shinshu University also contributed to the publication. 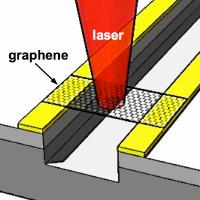