Thanks to lightning-fast software from the Department of Homeland Security's Science and Technology Directorate (DHS S&T), if a truck bomb was discovered in Lower Manhattan we will now be able to predict the likely damage patterns in the surrounding areas, and prioritize the first responders' activities long before the bomb's acoustic shockwave ricocheted out at the speed of sound.

It's called the Urban Blast Tool (UBT), and it stores a table of pre-calculated pressure loads that would course down Lower Manhattan's canyons after a range of blasts, from a humble car bomb to a massive truck bomb packing many times the payload of the Oklahoma City bomb.

For decades, such predictions stumped the fastest computers. Now, answers can be generated on a humble PC. The Urban Blast Tool was developed for S&T by Weidlinger Associates of New York. Using a dead-accurate city model already known, the software determines the damage building by building. Lower Manhattan has already been modeled and, pending Congressional funding, it will be joined by Midtown Manhattan and then parts of Los Angeles, Chicago, Washington, and Boston.

Each street in an urban area is a labyrinth of crevices, corners, and contours, where the course of a shockwave never could run smooth. These irregular features make a tough challenge tougher. When a shockwave strikes a building, some of its energy is absorbed; the remainder glances off, as a reflection. More often than not, the reflection rejoins the shockwave, making the wave more focused...and more violent. Blocks away, buildings and people will feel the punch. At 10 blocks, the wave may be packing only 1 pound per square inch (1 psi). But that's enough force to shatter windows and buckle walls.

After 9/11, scientists tried to model how a blast's shockwave would travel down specific urban canyons: If a bomb this size is set off at that spot, will the tower over there progressively fail? Will its beams hang low? Will occupants be able to evacuate safely? Safe evacuation is the most immediate concern.

These questions went unanswered because blast simulations weren't reliable. Beams, waves, and reflections trade energy in an intricate dance, especially within the bulls-eye of the blast, where pressures are extreme. Supercomputers running computational fluid dynamics can calculate the pressures as a shockwave radiates, but this can take weeks. In order to evacuate the most vulnerable buildings immediately, responders must size up the danger in minutes once a possible vehicle bomb is discovered.

In 2008, S&T began to look beyond the eye of the blast. After all, a blast would deliver much of its wrath blocks away and at lower pressures the force and effects could be calculated in mere seconds. Why not use computational fluid dynamics to pre-calculate the initial blast loads in fine detail, and store those results? Then, if an actual bomb explodes, responders and planners can call up these known values and crunch them through modeling software to warn responders of which structures may soon fail.

Lower Manhattan comprises some 100 city blocks and hundreds of tall buildings. Their makeup is no mystery: Google Earth and Google Streets know each streetscape, from every angle. Indeed, a vibrant community of Googlers has re-created a 3D model of each building, plaza, and park. Using these models as building blocks, Weidlinger built a virtual replica, fashioned from 1s and 0s.

To give the shockwave calculations a running start, Weidlinger drew on physics-based analytical software codes the company had developed for the Department of Defense (DOD). American soldiers in Baghdad were facing truck bombs daily. Earlier, to better understand that threat, DOD had conducted tests for which Weidlinger had modeled blast pressures and structural damage. The company applied this experience to the Urban Blast Tool.

The first code for the model predicts a blast's shock physics in all three dimensions, from its opening thunder through its closing whimper. Weidlinger determined how a blast's force would rise and decay as the wall of heated air fanned out, confronting specific buildings in its path.

A second code analyzes a building's strength and predicts distant damage, right down to the floor joists. Using codes, a blast wave propagation and structural response could be modeled for a typical sample of the area buildings, over a range of blast threats. Together, these models form a library--a cheat sheet--that makes quick work of calculating downstream damage. And it's done in seconds.

Since the software's interface was built on Google Earth, it has a familiar look and feel. That familiarity can be a life-saver after a bomb explodes, and responders, racing to the scene, may have just minutes to determine which buildings may tumble.

With the Urban Blast Tool software comes another important piece of software: the Emergency Evacuation, Rescue and Recovery Model (EERR).

This companion software can evaluate the odds that a column will fail, and its emergency systems suffer damage, no matter whether a building is made of steel frames, reinforced-concrete frames, or flat plates. The Urban Blast Tool and EERR are the crown jewels of a suite of S&T-funded applications designed to help cities protect infrastructure from blasts.

Like other S&T-funded technologies, the Urban Blast Tool is merely one weapon in a responder's toolkit. But on the urban battlefield, where threats require a layered defense, each layer counts.

"We can't thwart every bomb," says Kennett, "But here at S&T, we always looking for innovative solutions to protect more lives."

More on S&T's efforts in this area can be found at http://www.dhs.gov/files/programs/high-performance-integrated-design-program.shtm.

Join the DHS S&T team in a Webinar on February 8th. Download the flyer, http://www.wbdg.org/news/events.php?e=Cal_137, and register here: https://connect.hsin.gov/cutting_edge_tools/event/registration.html.

From opening thunder to closing whimper

US Department of Homeland Security - Science and Technology 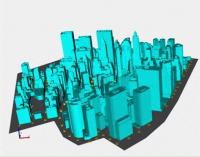