RIVERSIDE, Calif. - A research team led by physicists at the University of California, Riverside has identified a property of "bilayer graphene" (BLG) that the researchers say is analogous to finding the Higgs boson in particle physics.

Graphene, nature's thinnest elastic material, is a one-atom thick sheet of carbon atoms arranged in a hexagonal lattice. Because of graphene's planar and chicken wire-like structure, sheets of it lend themselves well to stacking.

The physicists report online Jan. 22 in Nature Nanotechnology that in investigating BLG's properties they found that when the number of electrons on the BLG sheet is close to 0, the material becomes insulating (that is, it resists flow of electrical current) - a finding that has implications for the use of graphene as an electronic material in the semiconductor and electronics industries.

"BLG becomes insulating because its electrons spontaneously organize themselves when their number is small," said Chun Ning (Jeanie) Lau, an associate professor of physics and astronomy and the lead author of the research paper. "Instead of moving around randomly, the electrons move in an orderly fashion. This is called 'spontaneous symmetry breaking' in physics, and is a very important concept since it is the same principle that 'endows' mass for particles in high energy physics."

Lau explained that a typical conductor has a huge number of electrons, which move around randomly, rather like a party with ten thousand guests with no assigned seats at dining tables. If the party only has four guests, however, then the guests will have to interact with each other and sit down at a table. Similarly, when BLG has only a few electrons the interactions cause the electrons to behave in an orderly manner.

Allan MacDonald, the Sid W. Richardson Foundation Regents Chair in the Department of Physics at The University of Texas at Austin and a coauthor on the research paper, noted that team has measured the mass of a new type of massive quantum particle that can be found only inside BLG crystals.

"The physics which gives these particles their mass is closely analogous to the physics which makes the mass of a proton inside an atomic nucleus very much larger than the mass of the quarks from which it is formed," he said. "Our team's particle is made of electrons, however, not quarks."

MacDonald explained that the experiment the research team conducted was motivated by theoretical work which anticipated that new particles would emerge from the electron sea of a BLG crystal.

"Now that the eagerly anticipated particles have been found, future experiments will help settle an ongoing theoretical debate on their properties," he said.

An important finding of the research team is that the intrinsic "energy gap" in BLG grows with increasing magnetic field.

In solid state physics, an energy gap (or band gap) refers to an energy range in a solid where no electron states can exist. Generally, the size of the energy gap of a material determines whether it is a metal (no gap), semiconductor (small gap) or insulator (large gap). The presence of an energy gap in silicon is critical to the semiconductor industry since, for digital applications, engineers need to turn the device 'on' or conductive, and 'off' or insulating.

Single layer graphene (SLG) is gapless, however, and cannot be completely turned off because regardless of the number of electrons on SLG, it always remains metallic and a conductor.

"This is terribly disadvantageous from an electronics point of view," said Lau, a member of UC Riverside's Center for Nanoscale Science and Engineering. "BLG, on the other hand, can in fact be turned off. Our research is in the initial phase, and, presently, the band gap is still too small for practical applications. What is tremendously exciting though is that this work suggests a promising route - trilayer graphene and tetralayer graphene, which are likely to have much larger energy gaps that can be used for digital and infrared technologies. We already have begun working with these materials."

Lau and MacDonald were joined in the research by J. Velasco Jr. (the first author of the research paper), L. Jing, W. Bao, Y. Lee, P. Kratz, V. Aji, M. Bockrath, and C. Varma at UCR; R. Stillwell and D. Smirnov at the National High Magnetic Field Laboratory, Tallahassee, Fla.; and Fan Zhang and J. Jung at The University of Texas at Austin.

The research was supported by grants from the National Science Foundation, Office of Naval Research, FENA Focus Center, and other agencies.

A broadcast studio with fiber cable to the AT&T Hollywood hub is available for live or taped interviews. UCR also has ISDN for radio interviews. To learn more, call 951-UCR-NEWS.

Bilayer graphene works as an insulator 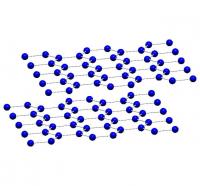