Improving fire-fighting techniques in space and getting a better understanding of fuel combustion here on Earth are the focus of a series of experiments on the International Space Station, led by a professor at the Jacobs School of Engineering at the University of California, San Diego. A first round of experiments ran from March 2009 to December 2011. A second round kicked off in January and is set to last a year or more.

Forman Williams, a professor of mechanical and aerospace engineering, has been working on fire research and fire safety with NASA since the 1970s. You will not, however, find him on the space station. The experiments are run by remote control from NASA's John Glenn Research Center in Cleveland. Williams and colleagues at Princeton, UC Davis, the University of Connecticut and Cornell analyze the results at their home institutions. They will present findings based on the first series of experiments this summer at a symposium in Poland.

All the experiments take place in a chamber located in the Destiny module of the International Space Station. The chamber is part of a piece of equipment called the Combustion Integrated Rack, which is roughly the size of a 5.5-foot bookcase and weighs close to 560 lbs. The rack is crammed with sensors and equipped with video cameras that record experiments. The chamber is equipped with a device called the Multiuser Droplet Combustion Apparatus that can generate and ignite droplets from different fuels in different atmospheric conditions.

Fire safety on the space station

The Flame Extinguishment Experiment, known as FLEX, ran in the chamber from March 2009 to December 2011. The goal was to get a better understanding of how fire happens on a space craft, where there is no up or down and where atmosphere and pressure are tightly controlled. The ultimate goal was to improve fire-fighting techniques in space.

To help understand how flames behave and burn in space, FLEX researchers ignited a small drop of either heptane or methanol. As this little sphere of fuel burned for about 20 seconds, it was engulfed by a spherically symmetric flame. The droplet shrank until either the flame extinguished or the fuel ran out.

Flames in space can burn at a lower temperature, at a lower rate and with less oxygen than in normal gravity. This means that materials used to extinguish fire must be present in higher concentrations. The slow flow of air from the fans mixing air in a spacecraft can make flames burn even faster.

The space station is equipped with carbon-dioxide fire extinguishers, so researchers investigated how fuel droplets burn in the presence of different amounts of CO2. Also, ambient air can become completely fire safe when there is not enough oxygen for fuels to ignite. This threshold is called the limiting oxygen index. Williams and colleagues pinpointed this index for methanol and heptane on the space station.

Williams is now working on a new series of experiments, called FLEX-2, which aims to recreate conditions that are closer to what actually happens in a combustion engine. Findings could lead to new designs for cleaner fuels that have a smaller carbon footprint and emit fewer pollutants, among other applications.

While the original FLEX experiments looked at fuels with only one component, FLEX-2 will run tests on fuels with two components, more similar to fuels used in real-life conditions, which usually have multiple components. While FLEX examined the behavior of single fuel droplets, the new round of tests will also look at the interaction of two fuel droplets.

But Williams said he isn't quite done with the original FLEX experiments. He and colleagues still need to explain some of what they observed. For example, when the flame around a fuel droplet extinguishes, that droplet should stop shrinking because combustion has essentially stopped. But in about a dozen instances during the FLEX experiments, heptane droplets kept shrinking at the same rate as when the flame was still burning. Williams, who has studied combustion for the past 50 years, said he has never seen anything like it.

Tests on the space shuttle

This is not Williams' first round of tests to be run in space. His work includes several experiments that ran on Spacelab, a science module flown in the cargo bay of U.S. space shuttles. The holy grail of combustion science is a flame around a fuel droplet that looks like a perfectly symmetrical sphere. That is very hard to achieve here on Earth. It is however a common occurrence in microgravity. Spherical symmetry makes it easier to observe droplets' behavior and to craft the calculations that explain it, Williams said.

During the space shuttle missions, he and colleagues used to work around the clock at the Marshall Space Flight Center in Huntsville, Ala. Williams and colleagues also took their families to Cape Canaveral to watch space shuttle Columbia take off in July 1997, when it was carrying a microgravity combustion experiment they designed.

William's interest in combustion dates back to his undergraduate days at Princeton. He was taking a graduate-level course. His professor wrote out on the blackboard the conservation equations of combustion. "When I realized how complicated they were, I said to myself that there is enough there to last me a lifetime," Williams explained.

Willams' colleagues on the FLEX and FLEX-2 experiments are: Frederick Dryer, of Princeton; Mun Choi, of the University of Connecticut; Benjamin Shaw at UC Davis; Tom Avedisian of Cornell; Vedha Nayagam at the National Center for Space Exploration Research; Michael Hicks, Daniel Dietrich and others from NASA's Glenn Research Center.

How do you fight fire in space? Experiments provide some answers 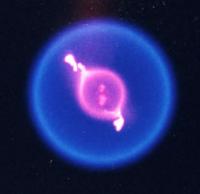 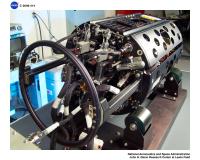 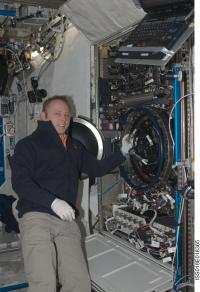